The Dalai Panda Slot is New to iSoftBet Casinos 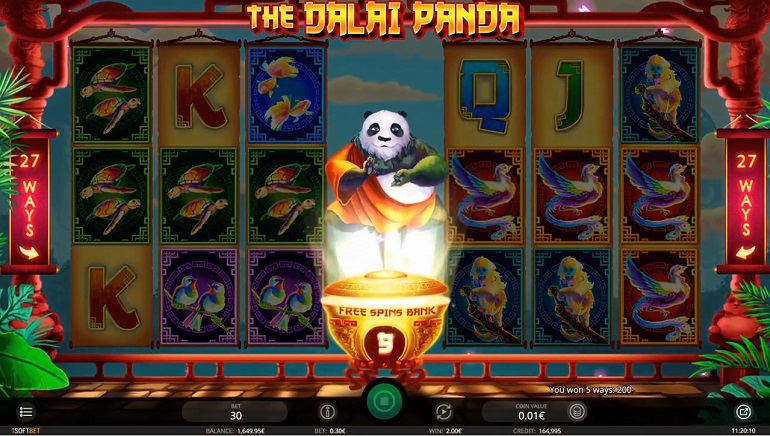 Get spiritual with The Dalai Panda slot, which is brand new to iSoftBet Casinos from October 2018 and beyond.

iSoftBet has finished the development of a brand new slot game called The Dalai Panda. Just to clarify, The Dalai Panda slot will now be playable at participating iSoftBet casinos on compatible desktop and mobile devices, including iOS and Android, from October 2018.

For the uninitiated, this new slot game is inspired by the real-life Dalai Lama, which is a role served as the spiritual head of Tibetan Buddhism. In this version, however, the role is being filled by a friendly panda that floats in the very centre of the of the slot game.

Fundamentally, the role of the Dalai Panda, is to divided to set of reels. Each is designed as a grid of three reels by three rows that add up to nine symbols apiece. For each set of reels, there will be 27 ways of winnings, with every wager covering players’ ability to win from all reels.

From a wagering standpoint, iSoftBet has dictated that players must spend a minimum €0.01 over the 30 fixed coins. At the very top end of the wagering scale, players can assign a €1.00 per coin to stake up to €30.00 per spin.

The divided reels have been designed that way on purpose, so that the Dalai Panda can later pull both sets of reels together. And the obvious advantage to this is that there will be 729 total ways of winning. This outcome will automatically whenever three or more bonus symbols are landed on the reels, with free spins appearing in an on-screen bank.

When both sets of reels are brought together, this allows for players to potentially match up to six bonus symbols to receive the 1,000x jackpot. The final special feature would be the wild symbol and its ability to plug the missing gaps between the various reels.