To Deep Space and Beyond: Zeus Play Releases Infinium 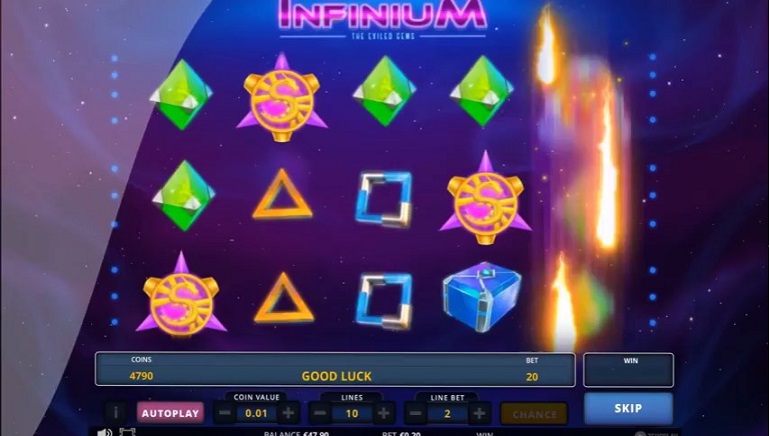 Infinium is the latest game from Zeus Play’s NXG line. This deep space adventure game takes place in 21st century earth and beyond. With 5 spinning reels, 3 stops, and 10 paylines, this slot game is the fourth addition to Zeus Play’s range of games. The gems in the game were created by universal cosmic civilizations. Players must collect gems in the right combinations to enjoy super-sized payouts as they blast off into deep space.

The perilous journey is a quest to return power to earth with these rare and precious gems. Sadly, intrepid explorers from the past were exiled in a space time dimension. During the game, you will encounter unique elements such as Coral Potyelite which comes from the planet Neynus. This water-saturated planet contains small aliens which use this coral.

Other elements include Scarlet Osaurite, from the planet Luarus. This gem was created when the rocks were melted and then froze. Yet another gem is Bronze Deslinsite. Emerald Zeopside was created on planet Tefrion by a climbing organism. Crystalline Monersonite was created by the fusion of 2 ancient alien civilizations. And Magenta Rose Spermuthinite is the result of a fusion of 2 galaxies.

Meteor Showers on the Reels

The Scatter symbol is the Scattered Dragonide, and the 7th Glowing Zenozite is the Wild symbol. Combined, these are all the Exiled Gems of the game. The space theme is evident throughout, and the game sports an urgency with the astronauts. The sounds of deep space are punctuated by radio transmissions between earth and the spaceship.

As the reels spin, players may notice meteor showers raining down as accelerated spins kick in. Overall, this game blends the classic allure of a Vegas slots experience with the vastness of space. It’s an eerie fusion of familiarity and the asphyxiating unknown.