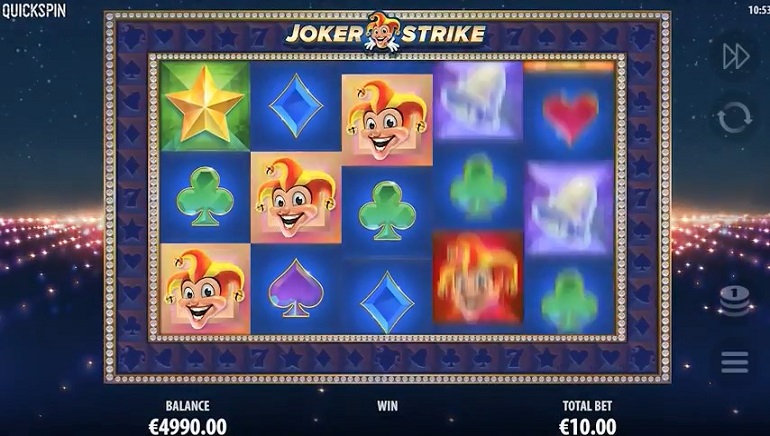 Joker Strike is a new slot from Quickspin that comes with a traditional design, but a unique way that winning lines of symbols can be boosted for even higher payouts

Joker Strike is a unique slot game from Swedish developer Quickspin, that comes with traditional-looking symbols but state of the art features.

Players who land winning combinations can get extra examples of the symbol that made up the win added to the reels, which can lead to a further prize payout.

At first glance, this looks like an older style fruit machine, where the symbols largely consist of playing card suits, silver bells and red 7's, along with a smiling Joker. But running around the outside of the 5 reels is what Quickspin have called an Outer Wheel, which has small images of each symbol on it.

Anyone who lands a win across any of the 10 paylines will see the reels held in place, while each of the symbols on the outer wheel is lit up in turn. Should this spotlight come to a rest on an example of the symbols that made the triggering win, more of the same type are added to the reels.

The number of extra symbols depends on the length of the original win-line, with 3 of a kind wins seeing 6 more symbols added, while lines of 4 will award 8 extra symbols, and players who have 5 matching symbols across the reels, and see the light stop on the same type, will get another 10 added.

A Double Chance feature adds the wilds, plus another marker light to the wheel, doubling the chances of hitting the Joker Strike feature.

This is a game with a fairly basic design, but a bonus feature that has the potential to reward players with some big prizes. Look for Joker Strike at Quickspin online casinos.