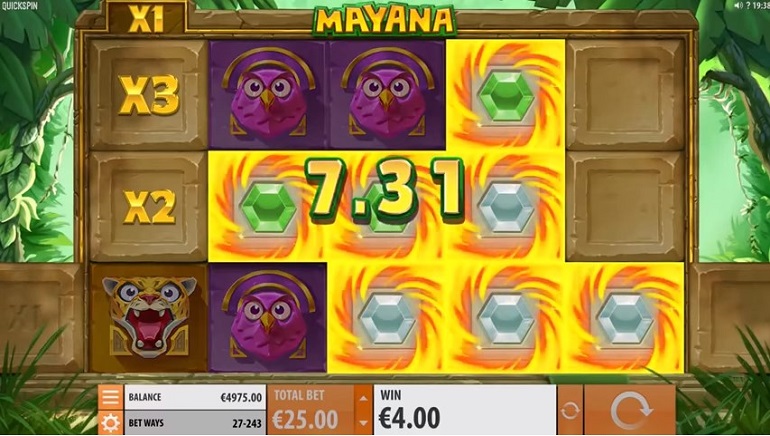 Mayana features a big winning potential that comes with increased volatility, so this slot probably isn't the best pick for those who love small and steady wins.

Ancient empires of Incas, Mayas, and Aztecs seem to be an endless source of inspiration for slot creators from all corners of the globe. One of the latest games to prove this point is Mayana slot by Quickspin, a game hiding some huge winning potential for those capable of riding out the variance inherent to Mayana.

Set on a backdrop of a Mayan temple, the latest Quickspin slot features recognizable graphics with bright colors and uplifting sound effects. With reels filled with colorful diamonds and various Mayan religious masks, the game gets you in the right mood to explore the secrets hidden behind the walls of the ancient temple.

Although the graphics isn't too complex and there aren't any superb animations that players might be used with other modern slots, Mayana certainly features smooth and interesting gameplay that can keep you occupied for a while.

Mayana starts off on a 3x3 grid with 27 pay ways. However, with every successful winning combination, the symbols are locked in place for the next spins and the grid expands, adding more potential pay ways and increasing the multiplier.

The grid will become fully expanded after three consecutive winning spins, creating 243 ways to pay. The reels will continue to spin as long as there are new winning symbols added to the combination, with all wins multiplied by three. The goal is to fill the board with the highest paying symbols such as the red priest mask or the tiger mask, as these can pay quite handsomely.

Once the grid has fully expanded, as mentioned, the slot will continue to spin for as long as new symbols are added to winning combination. Once you miss, spins will end and the grid will go back to the original 3x3 setup.

However, before that happens, there is a possibility of the Mucha Mayana feature being randomly triggered. When this happens, the slot will start shaking, and the last win will be assigned a multiplier higher than the base 3x, and it can be anywhere from 4x to 20x.

All in all, Quickspin's Mayana is a game that can quickly eat up a nice portion of your bankroll, but it also hides a potential to pay huge on a lucky spin, so it will appeal to players who enjoy chasing those big, elusive wins.