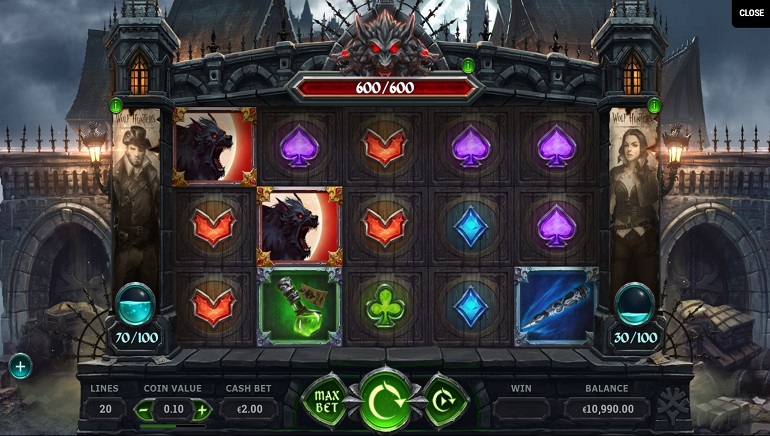 Yggdrasil has released a werewolf-themed slot for September 2018. Wolf Hunters arrives just in time for Halloween and is compatible on mobile and desktop.

October is right around the corner and Yggdrasil Gaming is getting ready with the September 2018 release of the brand new Wolf Hunters slot. The game is out now at Yggdrasil casinos and shall be playable on Windows, Android, and iOS, while the supported browsers are comprised of Chrome, Firefox, and Internet Explorer.

Wolf Hunters has been designed akin to a gothic cartoon, with elaborate architecture and intricate devices on display throughout. Set at the gates to a dark mansion, the main slot interface has been assembled using five reels and three rows. With 15 symbols in total, it is possible to win on up to 20 fixed paylines.

At the minimum, Wolf Hunters allows for a €0.005 coin value and a low wager of €0.10 per spin. And there is further scope for increase beyond that threshold, with Wolf Hunters permitting a maximum wager of €100.00 per spin at a €5.00 coin value.

Wolf Hunters has a feature in which players are encouraged to build up Rage Points for the Hunter and Huntress. A complimentary amount will be provided in the beginning, but the onus will then be on the players to earn even more. Once either character reaches 100, they will have the benefit of receiving Free Spins.

The Hunter and Huntress have their own ways of triggering free spins, but it will also be possible to gain Slayer spins by taking the werewolf’s health right down to zero. At this point, the player will see werewolf symbols changed into wilds and then become expanded.

Landing wild symbols shall be rewarded with re-spins, while every werewolf symbol shall be attacked by one of the hunters at random. Meanwhile, there are also bonus symbols that can appear on the first and fifth reels to provide other ways of earning free spins.