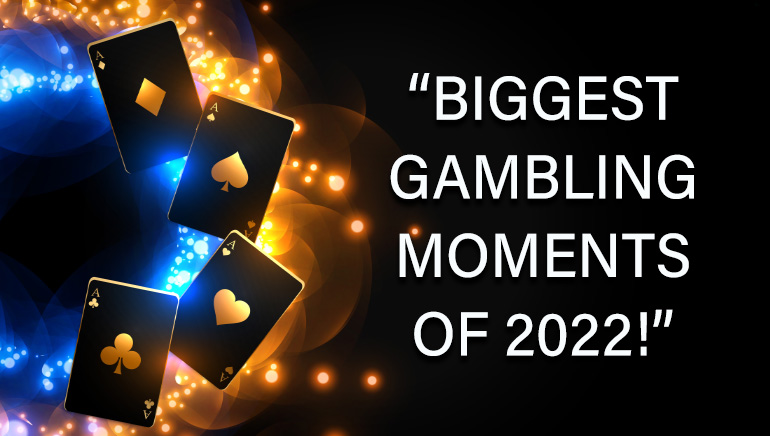 As the end of 2022 approaches, join us as we celebrate its successes, learn from its challenges and face what 2023 has to offer with confidence.

As 2022 draws to a close, we decided to look at some of the highs and lows of sports betting, online casino entertainment, NFTs and the cryptocurrency market. With decades in this industry, the one thing that this annual highlight reel reminded us of is the fantastic tenacity, flexibility and drive that the iGaming industry continues to show.

2022 has been an incredible year for online casino fans, with a range of new and old video slots and jackpot games delivering mind-blowing jackpot payouts. Here are several amazing big-win stories, one yet to be written.

One lucky Canadian saw their Christmas wish become a reality as a $4.50 spin on IGTs PowerBuck$ progressive slot transformed returned a multi-million dollar windfall. To be in the running to win the top-tier jackpot, players must stake a minimum of $3 per spin. For this lucky Canuck it was well worth betting the cost of a Starbucks Frappuccino Venti thanks to the amazing $2,143,114.10 jackpot prize!

The Millionaire Maker in Full Force

Microgaming’s Mega Moolah progressive jackpot network is always front of mind when discussing life-changing payouts. As expected, the Millionaire Maker slot has been at it again this year, cranking out massive prizes.

When writing, the Mega Moolah jackpot prize pool was worth more than $8.7 million. According to stats tracking sites, the jackpot has paid out an average of $5.9 million and is hit approximately every eight weeks, making it ready to be claimed again.

Jackpots That Will Wow You

Microgaming’s second most popular progressive jackpot slot is WowPot. This year the WowPot network paid out several astonishing prizes, including $10.9 million on Cash N Riches on July 28th and another big win of $4.9 million on Ancient Fortunes on August 12th! When writing this post, the WowPot Mega jackpot had reached an all-time high of $16.7 million, more than double its average recorded jackpot since its launch in 2020.

Keep an Eye on This Sleeping Giant

While Playtech is not known for its progressive jackpot games, we felt that Jackpot Giant deserved an honourable mention. The fairly unknown jackpot slot is currently sitting on a prize pool worth more than $6.8 million. More importantly, the last time it paid out was in 2019, when a lucky player landed a $2.7 million windfall. The combination of a long break and a sizeable jackpot might have a betting man paying close attention to Jackpot Giant.

Undoubtedly, the  FIFA World Cup Qatar 2022 was one of the year's most meaningful sporting events. Not only did the world's biggest sporting event have its share of upsets, with Morocco defeating Spain and Croatia defeating Brazil, but it also created moments that football fans will never forget. Most notably, fans of the sport celebrated Messi leading Argentina to victory and claiming the Golden Ball of the tournament – a fitting way to end his World Cup career with a team he has been a part of for seventeen years.

It’s a Good Thing He Sings for His Supper

In celebrity sports betting news, Drake made headlines for his insanely unlucky loss during the World Cup. The singer-songwriter lost out on a $1 million payday despite betting on Argentina to win the World Cup final. Rather than a straight win-loss wager, Drake placed a 1x2 market bet that said Argentina could clinch victory in regular time. Unfortunately, the world-renowned football team beat France in overtime, costing Drake a bag of cash.

The Mack is Back!

Shifting shores to the United States, we look at one of the country’s most beloved sports betting icons, Mattress Mack. James Franklin McIngvale, or Mattress Mack as his fans know him, is a 71-year-old business owner and sports betting legend who is often in the news for crazy wagers and even crazier wins. The Texan had to cross state lines to legally bet on the Houston Astros to win the World Series. With $10 million on the line, the 7.5-1 bet paid off in spades as the Astros defeated the Philadelphia Phillies, netting Mack a cool $75 million in the process.

Our final story is a feel-good piece that proves you don’t always need to be able to bet big to walk away with a big win. An unnamed college football fan went big with a $7 bet on a 25-leg parlay. By the end of the first 23 games, the bettor had turned his $7 love of the game into an astounding $252,160! Sadly, he got cold feet and cashed in his slip before the final two legs, which he had, in fact, correctly predicted. Had he stayed the course, his final payday would have been a jaw-dropping $1.016 million!

3. A Rocky Year for Cryptocurrency Gambling

To say that 2022 has not been kind to crypto supporters is the understatement of the year. The industry saw its figurehead token, Bitcoin, plummet from a $50,000+ valuation to lows of around $15,700, causing many high-price investors to exit the market. Thankfully the online gambling community sees more than a single value proposition the crypto and blockchain leading it to continue to grow and develop despite these setbacks.

Here is a brief look at the challenges this fledgling industry has overcome and what it means for crypto gambling.

In a shocking turn of events, one of the most prominent players in the DeFi sector, FTX, imploded over a few days costing investors billions and rocking the crypto market to its core.

The once-celebrated crypto billionaire, Sam Bankman-Fried, has become an industry villain as the truth behind his mismanagement of investor funds is brought to light. Investigations into the FTX crypto exchange crash have shown that Friedman was involved in a series of murky dealings. Thes dealings included moving funds between the exchange and the Alameda investment firm and breaking terms of service that did not allow certain investments to be used for lending or collateral.

The claims of mismanagement and lack of liquidity, along with Binance offloading its shares in the company to protect investors, saw a run on FTX that drove it from $32 billion to bankrupt in a week. Friedman was arrested after fleeing to the Bahamas and is currently out on $250 million bail as he awaits trial.

Naturally, the ripple effects of this momentous case have been felt across many industries, including crypto gambling. With the loss of equity and consumer fears over the value of crypto, there was a marked slowdown in crypto wagers. Since then, the market has shown renewed signs of life.

Not Just a Pretty Picture

As with many crypto initiatives this year, the bottom fell out of the NFT market. Despite this “crash”, key art pieces like the certain Bored Apes managed to maintain a reasonable market value sparking hope that it rebounds as soon as investor confidence is restored post the FTX debacle.

The halt on mass NFT minting and trading is one of the reasons that Ethereum has struggled to regain its footing in the latter part of 2022. ETH needs high transaction volumes to buoy its market value as a functional token. A large portion of its early value was created and maintained by its biggest business sector, NFTs.

On a lighter note, no one does NFTs like Donald Trump does NFTs. The former president of the USA launched his inaugural digital trading card collection, featuring himself as the hero of several scenarios. Priced at a modest $99 per unit, the 45,000 card collection sold out in under twelve hours, netting sales of nearly $5 million! The secondary market for these Trump NFTs is booming, with an average selling price of $650, more than six times its ticket price.

Crash game providers like Aviatrix continue to innovate in this space, creating attention-grabbing casino games that offer customisable NFTs and boast plans for a marketplace where fans can trade and sell their crash game NFTs.