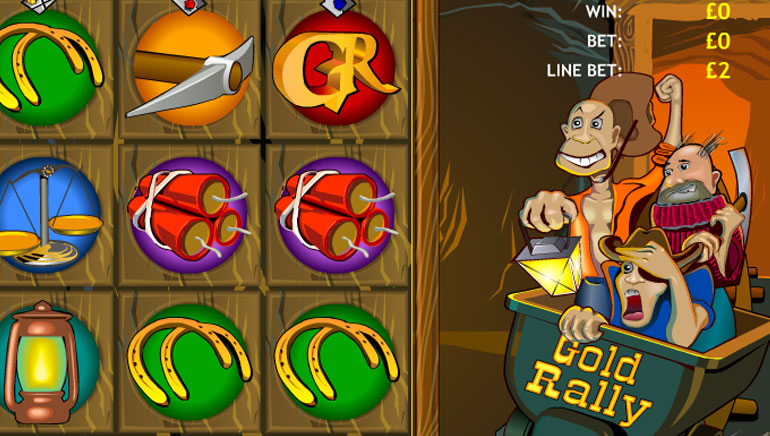 Playtech has many sparkling gems in its formidable gaming stockpile; chief among them is Gold Rally progressive slot. This game has rewarded scores of players, many times over. Its rich bounty is surpassed by few other online casino games and it is the crème de la crème of Playtech's finest. The game itself is feature-rich and laden with fun-filled gaming elements. The audio-visual effects and animation are world-class. This game pays out on an all-too regular basis and its jackpot star power never dims. With a pedigree as pure as this one, it's little wonder that a jackpot of $1 million + was won by a Chilean back in 2005. There are 9 scatter symbols, mega-bonus rounds, galloping cowboys and rooting-tooting entertainment every step of the way. Big jackpot cash and golden nuggets are the rewards for lucky gamers.

Gold Rally progressive jackpot is one of the few games that regularly reward players with such whopping paydays. The last payday was 3 months ago for a smashing $1,333,602. Before then there have been numerous mega-payouts totalling over $11 million dollars. The current jackpot tally is $325,885 and the average hit is $914,000 every 61 days. So there's plenty to look forward to here.

Gold Rally progressive jackpot is a 9 reel, 8 payline progressive video slot game. It features lively animation and a host of tenacious cowboy characters daring to unravel the mystery of the hidden gold. Coin sizes are fixed at 2 currency units per payline ($/R/€). It's a fast and furious gold rally adventure with one thing in mind: more money than ever before.

Gold Rally progressive slot has been around for many years. It's the most well-known of the major payout games. Big winnings were recorded by: Cari M. who won $1,853,873 and Chiaki S. who won $489,753, among others.

For action aplenty and progressive jackpots of note, there is no better game than Gold Rally. It's fast and furious and loaded with the biggest paydays from deep within the earth's bosom. Start digging; the race for multi-million dollar paydays is on.

The Big One Colossal Cash