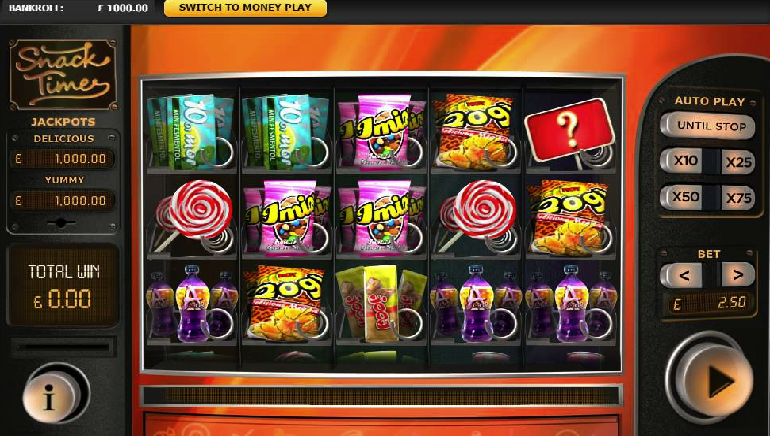 Try out Snack Time for one of the tastiest progressive slot experiences out there. Learn about the jackpot and special features right here.

Snack Time is a slot game that combines junk food with a progressive jackpot to serve up a tasty new creation. Slot developer Random Logic has gone to major lengths in Snack Time, with the slot designed as a vending machine to show off all of the delicious symbols.

There are many different combination that players can win from, as Snack Time’s interface has been constructed using five reels. However, players are going to be most interested in the Snack Time progressive jackpot.

This has actually been divided in two, with a large and a small sub-jackpot available. These cannot be won from a clear outcome, as Random Logic has aptly chosen for the jackpot to be won at random. The only way to enhance the odds is to wager with bigger stakes.

In Snack Time, the bulk of the winnings shall be earned through creating snack combos. These can be formed through landing two or more, three or more, and four or more. Basically, the bigger the combos are, the larger the winnings will be – Snack Time doesn’t have set paylines.

Snack Time also has a Pick Me feature that begins with two of these symbols landing on reels one and five, which will guarantee a portion of winnings being earned.

Snack Time is a slightly more modest progressive jackpot where €50,000 would be considered one of the biggest in the game’s history – this happened back in December 2016 at 888.