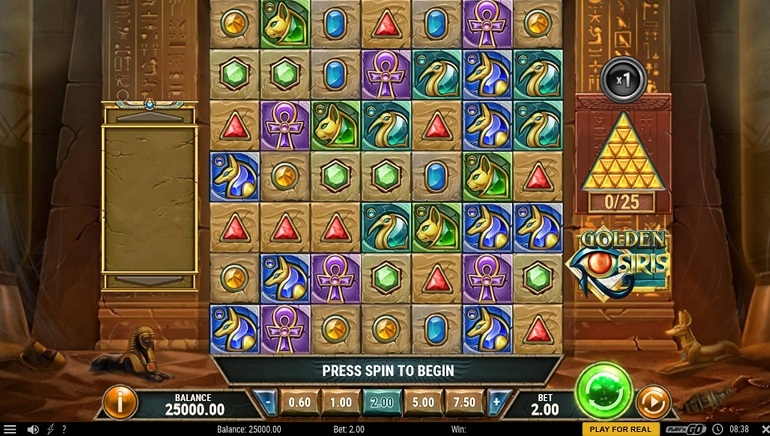 Wilds, multipliers, free spins, and more make Golden Osiris a golden opportunity for slot players to have fun and try to win some cash. The 7 out of 10 volatility makes this game exciting enough for experienced players but not daunting enough for newbies.

Golden Osiris from Play’n GO is an Ancient Egypt-themed slot that includes cascading symbols and several high-potential features. Hidden wilds, a pyramid charger, multipliers, free spins, and a second chance to land more scatters make this game an all-around winner. While the Ancient Egypt theme has been done before, even by Play’n GO, the combination of features, quality graphics, and a potential max win of 12,000 the stake make this slot an alluring additional to the developer's portfolio.

Golden Osiris is a 7x7 grid that’s playable on all devices. Play’n GO has used the cluster mechanic in this game, which means that wins are scored by landing 5 or more matching symbols in a cluster. When a winning cluster is formed, the symbols disappear and new ones cascade down. Golden Osiris rates 7 out of 10 on the developer’s volatility scale and has a default RTP of 96.27%.

Symbols include 4 lower-paying gems and 5 higher-paying birds, cats, Ankhs, jackals, and scarabs. There are also hidden wilds, which are 4 wilds that sit on the reels but are hidden behind other symbols. If a symbol that’s hiding a wild is removed from the grid as part of a winning cluster, the wild then appears, creating more potential for wins. Every wild comes with a multiplier that can reach up to 10x.

Golden Osiris includes a pyramid charge that gets filled with symbols from winning combinations. If it gets filled with 25 symbols, one standard symbol is chosen randomly and wherever it appears, it expands to join matching symbols. The pyramid charger can be retriggered, and the second time, it comes with a 3x multiplier. If any subsequent retriggers occur in the same spin, the multiplier can reach up to 30x.

When 3 scatters land on the reels, players get 5 free spins. During this round, the pyramid charger gets filled automatically and plays out once there are no more winning clusters. Only the higher-paying symbols are chosen to expand. If another set of 3 scatters lands on the reels, players get another 5 free spins. Hidden wilds are active during this round as well.

If only 2 scatters land on the reels, a destruction feature is triggered and all symbols adjacent to the scatters are destroyed, making room for new symbols to drop.

Wilds, multipliers, free spins, and more make Golden Osiris a golden opportunity for slot players to have fun and try to win some cash. The 7 out of 10 volatility makes this game exciting enough for experienced players but not daunting enough for newbies. In other words, it’s for everyone. The Ancient Egypt theme is classic and fits nicely with the slot’s features. Golden Osiris can be played at Play’n GO casinos, online and on mobile.