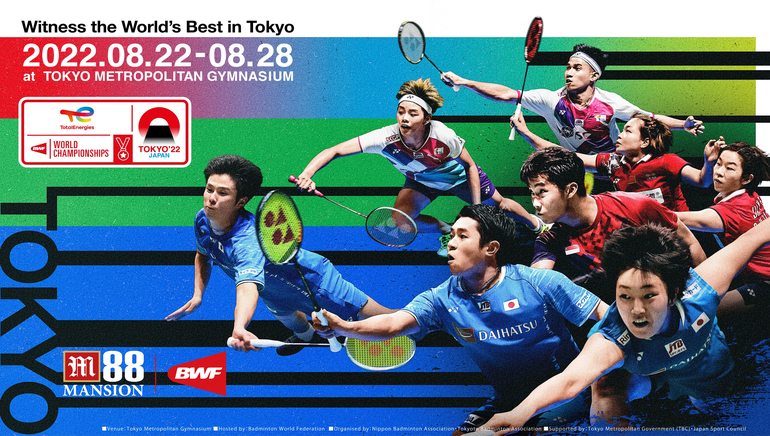 The BWF World Championships have been organized since 1977, and it will be held in Japan in 2022. The upcoming event will occupy the Tokyo Metropolitan Gymnasium from the 22nd to the 28th of August, seeing more than 300 players competing for the throne. This year’s official betting partner is M88 Mansion, providing complete event coverage and highlights on its site and socials.

The Badminton World Federation and its betting partner M88 Mansion will be hosting the 2022 BWF World Championships, a major badminton tournament taking place in Japan this year. The event is scheduled to begin on August 22nd and last until August 28th, with matches unfolding at the Tokyo Metropolitan Gymnasium in Tokyo. Major badminton event hosts have been known since 2018, so there was enough time for the Japanese capital to get ready for a spectacular tournament.

Tokyo Hosting for the First Time

Five Asian nations have hosted badminton’s greatest tournament so far. However, this is the first time the event is coming to Japan. The tourney has been staged every year since 1977 when it was first organized. The only exception was the years that saw the Summer Olympics taking place. Spain hosted the event the previous year in Huelva.

More than 40 countries and 300 participants will attend the competition in Japan 2022, trying to reach the highest ranks. Here are the current champions in all five categories:

The tournament draw brought interesting matches all badminton fans can look forward to. The draw was organized in Kuala Lumpur, Malaysia, and took place on August 10th. From that day forward, men’s singles world number one Viktor Axelsen and fellow Dane Rasmus Gemke know they will likely cross racquets in the quarter-finals. The semis may possibly see Indonesians Jonatan Christie and Anthony Ginting battling for the chance to scoop the title.

The women’s singles pairs are also interesting, with Yamaguchi and Takahashi Sayaka potentially playing in the third round. Sayaka will have her hands full, playing against the top seed as a 14th-ranked.

On the other hand, it will probably be smooth sailing for the favored pairs in the doubles categories, as they seem to have avoided some tough early challenges in their draw sections.

M88 Mansion and BWF are partnering for the TotalEnergies BWF World Championships 2022 in Japan, providing updates and highlights before, during, and after the event. Be sure to follow the betting partner’s official website, as well as the supporting social media accounts. In addition, M88 Mansion and BWF are expected to publish a feature and an interview of the top BWF player as a special treat for the fans.