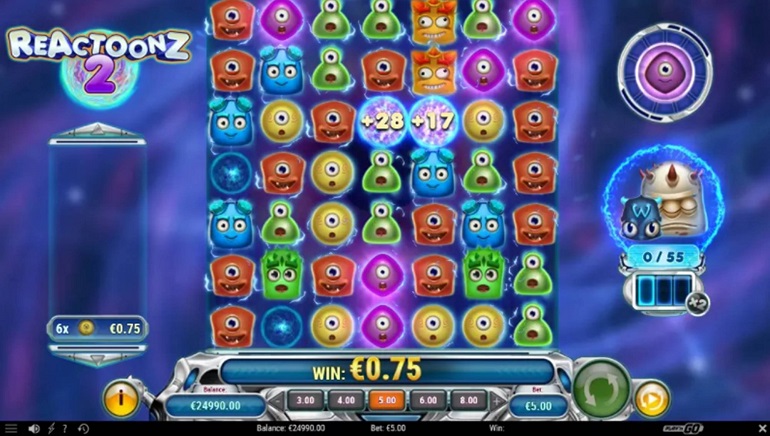 Reactoonz 2 is the follow-up to a popular online slot from Play'n GO. It packs the reels with even more exciting bonus features triggered by cartoon aliens.

The Reactoonz 2 slot from Play'n GO is the sequel to a popular game where cartoon aliens fill a 7x7 grid, triggering a wide range of bonus features. Launched on October 1st, this high volatility game is available in PC and mobile formats.

The colourful aliens each have their own style and pull different faces across the grid. A Fluctometer and Quantumeter to either side of the game will help trigger the bonus features.

Clusters of 5 or more matching aliens create a win, helped by wild symbols and giant Gargantoon symbols. The Reactoonz 2 slot uses a cascading symbols mechanism, which removes winning symbols and allows new ones to drop down to fill the gaps.

Players will find Uncharged Wilds on the grid at any time. If a winning cluster appears next to an Uncharged Wild, or Electric Wilds appear, they become active and add value to any combination.

The Fluctometer selects a random low paying symbol in each round. If the symbol becomes part of a win, it adds to the meter, and once full, up to 3 Electric Wilds are placed randomly on the grid.

The Quantumeter is charged with winning clusters, and depending on how many symbols appear, it charges to 1 of 4 levels. At the lower levels, the Quantumeter unleashes a wild Energoon symbol, while at higher levels of charge, it unleashes 2 Energoons, each in 2x2 size, or 4 Energoons into random positions.

Should the Quantumeter get overcharged by enough symbols, it releases Gargantoon wild symbols. Either 4 Gargantoons, two 2x2 symbols, or a 3x3 symbol will appear, depending on the level. Wild multipliers can double wins, leading to a maximum payout of 5083x the total stake.

Players can now discover the cute aliens and their special powers to charge meters with the Reactoonz 2 slot at the top Play'n GO casinos.