All Hail, The Age of Caesar Slot has Arrived! 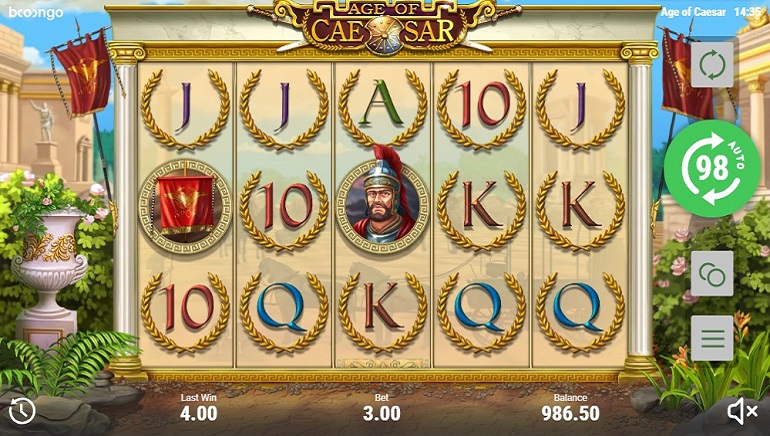 Booongo has released a game worthy of an Emperor’s touch: Age of Caesar Slot. This Roman-themed slot game features 5 spinning reels, 3 rows, and 30 paylines of glorious entertainment. Age of Caesar slot is an epic adventure with HD audio-visuals.

Booongo is known for creating interactive video slots games. The latest addition to its gaming repertoire is the Roman-themed Age of Caesar slot game. Fashioned off the iconic Emperor and his legionnaires, Age of Caesar slot game is imperial in every sense of the word. The musical score is reminiscent of epic Hollywood blockbusters, with orchestral sounds reaching a crescendo as the reels spin, revealing masterfully created icons and winning combinations.

The litmus test of Age of Caesar slot game is evident in the way it plays out. The game runs direct off your browser, using Flash functionality. The vivid colours and crystal-clear sounds transform your screen into a rollicking adventure of Roman-themed fun and games. There are 5 reels, 3 rows, and 30 paylines of warriors and Roman symbols in the game. Players can toggle their bet size by clicking on the bet icon and selecting anywhere from 0.30 through 90.00 per bet. The + and - buttons allow you to increase or decrease your bets accordingly.

A variety of other symbols are found on the reels including the Caesar gold coin, the Roman empire flag, the lady, and the legionnaire. Low-paying symbols include 10, Jack, Queen, King and Ace. Age of Caesar slot game is best played with the music cranked up to the max. Players will enjoy Super Mega Wins, and a seemingly endless supply of free spins. Autoplay functionality is also available, where players can select anywhere from 10 – 1,000 spins at their pre-set bet level. You can disable Autoplay at any time. For an amazing online gaming experience, Age of Caesar slot certainly raises the bar, and Booongo has delivered in a big way. Find this one at Booongo online casinos.