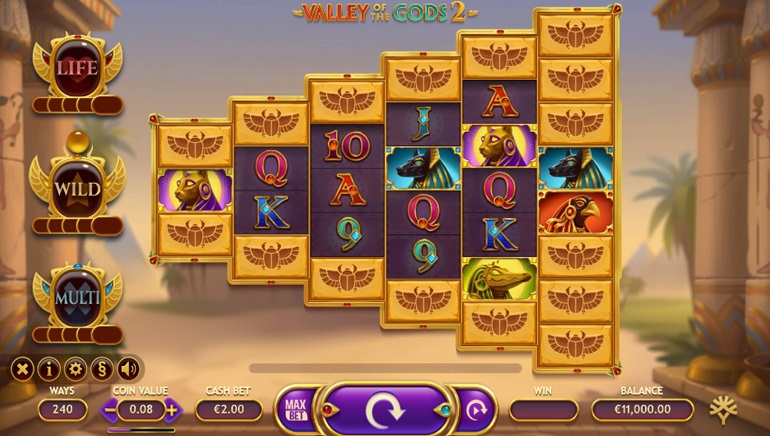 Yggdrasil return players to Ancient Egypt with their Valley of the Gods 2 slots game, where they will find respins and expanding reels.

Valley of the Gods 2 is a new online slot from Yggdrasil where players will discover some ancient magic among the pyramids of Egypt. Reels respin on each win, increasing the number of ways to win to a maximum of 20,160.

The unusual 3-4-5-6-7-8 reel layout is filled with Egyptian gods and playing card symbols, set against a backdrop of temples, columns and palm trees. Scarab beetles block parts of the reels, and play starts out with just 240 ways to win. Scarabs vanish with each winning symbol, unlocking more and more of the game over a series of respins.

Once all scarab blockers are removed, a series of extra features come into play for any further respins. Players collect red scarab symbols in a meter to claim extra lives, meaning that the reels won't reset in the event of a losing respin, while blue scarabs add multipliers to any further wins.

Yellow scarab symbols create wild reels which stay in place until the end of the respin feature. Valley of the Gods 2 is a medium to high volatility slots where it's possible to win up to 5481x the total stake. It's available in desktop and mobile formats and players can spin the reels for stakes of between 0.10 and 100.00.

Jonas Strandman, Senior Product Strategist at Yggdrasil, said: “Valley of the Gods became an instant classic from its simple but deep gameplay and thrilling re-spin rounds. The sequel has everything we loved from the original and more. Packed with plenty of modifiers, Valley of the Gods 2 can turn any spin into a huge win up to 5481 times the bet for our fans across the globe.

“The new wild reel feature shows up on a regular basis and can give huge win combinations and combining it with a multiplier is marvellous. We are confident our partners and their players will love the game.”