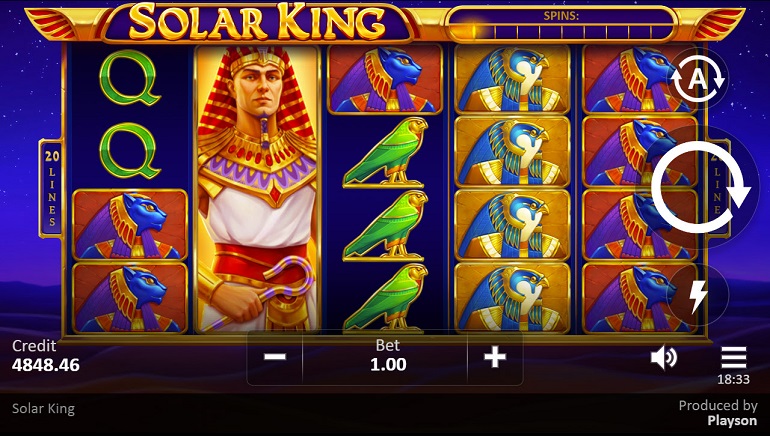 Fresh from Playson is the brand-new Solar King slot that carries a 2,221x maximum win, free spins, and the special Flaming Frame feature.

Solar King is the newest video slot to release in Playson’s Solar series, following in the footsteps of Solar Queen and Solar Temple. As with Solar Queen, the theme is Ancient Egypt and users can play a mobile-compatible slot that offers 95.45% return to player (RTP), high volatility, and a selection of special features.

Functionally, the slot shall operate with five reels and four rows that can utilise 20 paylines to provide winnings from matching symbols. Several creatures from Ancient Egyptian mythology have been used as symbols next to a handful of playing cards. Special symbols have also been integrated for unlocking the bonus features.

Standing tall above all symbols in the base game is the pharaoh, who can fill an entire reel. The pharaoh is the most valuable symbol in the entire Solar King slot and should be integral if players are to trigger the maximum winnings of 2,221x. To wager on Solar King, players can stake a minimum of €0.20 up to the highest level of €100.00.

Playson has developed the Flaming Frame feature to reward players for landing Sun Symbols within this random overlay mechanism. By entering the Flaming Frame, the Sun Symbols can give the player 10 free spins. To receive free spins, the aim is to obtain three scatter symbols on the first, third, or fifth reels.

And every subsequent entry from a Sun Symbol can grant the player a 1x multiplier up to the 10x ceiling that is permitted. The Flaming Frame can serve to hold all symbols in place for 10 spins. On the 10th spins, the suns will transform into wild symbols to help the player. As ever, the wild symbols have been included to fill the missing positions of standard symbols within paylines.