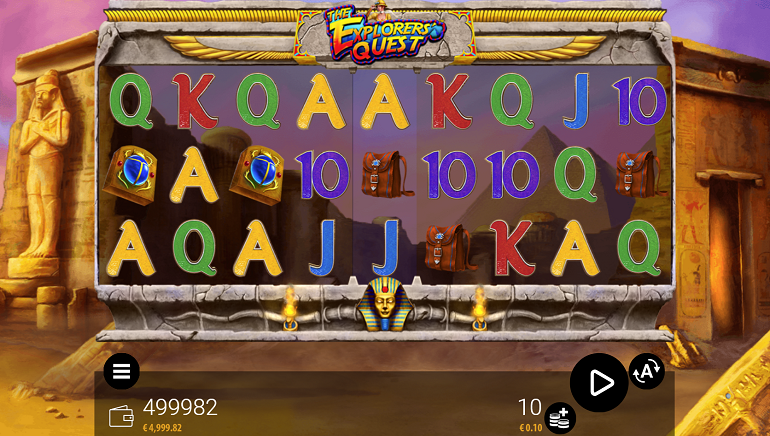 The quest is on. Vanessa must seek out hidden jewels and gold coin in Nero’s Treasure Room. The Explorers’ Quest slot by Zeus Play is a fascinating, interactive adventure into the heart of ancient Egypt.

The Explorers’ Quest slot from Zeus Play is engaging, stimulating, and adventure-laden throughout. Fashioned off an ancient-Egyptian theme, this slot machine game takes players on a wild ride through the pyramids in an epic archeological odyssey. While the origins of pyramids are often the subject of intense debate, there is no question as to the wealth of treasures hidden within their chambers. The Explorers’ Quest has a 94% RTP, and is considered a low volatility video slot game. However, its action all the way from the very first spin.

The slot machine game is truly unique in that it showcases 10 paylines, 9 spinning reels, and 3-stop features. Among others, The Explorer’s Quest brings a terrific new element to the scene known as a Shared Reel. This can be found on reel #5. This shared reel makes it possible for players to spin up a storm and generate returns from left to right, or right to left, right up until the shared reel. This wonderfully entertaining slot machine game is set against a majestic ancient-Egyptian backdrop with fires burning within the temple's chambers.

Multiple feature-rich elements are at play including a combination of high-paying symbols and low-paying symbols. The high-paying symbols include Vanessa the Explorer, the treasure chest, the amulet, and the satchel. The low-paying symbols include the 10, Jack, Queen, King, and Ace icons. With the Common Middle Reel allowing for payouts in any direction, an expanding symbol offering up to 20 bonus spins, and up to 15,000,000 coins up for grabs, this game certainly impresses with its generosity. There is yet another feature available to players in the form of Nerul’s Treasure. When players land 2X Chest Symbols, this bonus feature is triggered.

The Explorers’ Quest slot is a highly-engaging game from Zeus Play. Players are cautioned to take care when playing for real money. All gambling activity encompasses risk, particularly for impressionable players. Always set a budget and stick to it. Never gamble with money that you cannot afford to lose. Before you enter The Explorers’ Quest, practice in demo mode to prepare for a real adventure.