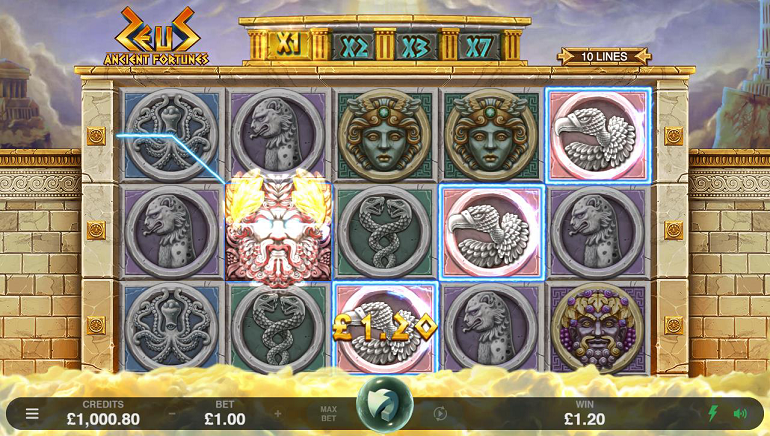 Ancient Fortunes: Zeus is the brand new slot from Triple Edge Studios. This is available exclusively at Microgaming casinos and is compatible on desktop and mobile.

Set atop the stunning slopes of Mount Olympus, the slot has been created with five reels and three rows. And, although there are just 10 fixed paylines, Triple Edge Studios has ensured that they will pay both ways.

The developer has also added the Rolling Reels™ for the benefit of the base game. Quite simply, this is a feature that will cause winning symbols to disappear. Once they are gone, the spaces will then be filled by brand new symbols. Ultimately, it is possible to reach a 7x multiplier with a string of consecutive wins.

Rolling Reels™ can provide 1x, 2x, 3x, and 7x multipliers in the base game. However, all of those rise up to 3x, 7x, 11x, and 21x if free spins are triggered. This can be done by landing three or more lightning bolt symbols on the same payline, starting from either side of the slot interface. Three bolts will provide 10 spins, four gives 15, and three earns 20.

As expected, the wilds are able to substitute for all symbols, according to the paytable. Players should take note, however, that combining a wild symbol with five lightning bolts can trigger 50 free spins. During this feature, it is possible to keep on triggering free spins.

Triple Edge Studios has an agreement to exclusively develop games for Microgaming. Therefore, it is only possible to play Ancient Fortunes: Zeus at Microgaming casinos alongside the likes of Wicked Tales: Dark Red, Diamond Empire, 108 Heroes: Multiplier Fortunes, Book of Oz, Halloween, and Playboy Gold.