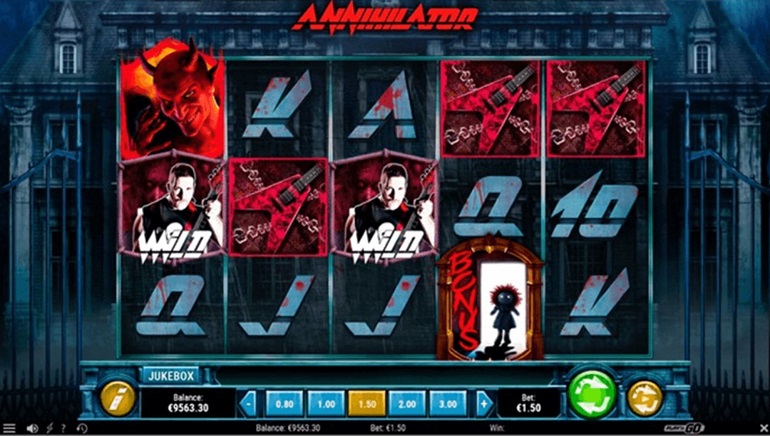 Play’n GO has released Annihilator as another new video slot inspired by edgy bands from the rock and metal genres.

In recent times, Play’n Go casinos have received a steady stream of music slots. House of Doom, Demon, Black Mamba, and Testament are all licensed and created based on real-world rock and metal bands. And now a fifth name can be added to the bill with the release of the brand-new Annihilator slot at participating Play’n GO casinos online.

Founded in 1984, thrash metal band Annihilator is the brainchild of Canadian guitarist Jeff Waters, who’s known for virtuoso solos. Eight pieces of album artwork have been selected to feature on the reels. Seasoned fans are certain to recognise the chosen artworks from the band’s extensive back catalogue.

Each spin can be made from a minimum €0.10 stake and there are 10 fixed paylines that can deliver winnings when symbols align correctly from left to right. Annihilator is quite a straightforward slot in that there are five reels by three rows and the game is capable of displaying on mobile screens.

Wilds are useful when substituting for standard symbols and users can play along while listening to the Annihilator playlist. Wilds can expand when the In Command feature triggers at random. Without a win, the expanded wilds stay in place until the player wins.

With three scatters, users can trigger eight free spins. Known as the Set the World on Fire feature, this displays an expanded wild that can move sideways. There’s also a trail of fire with up to three symbols and free spins can be triggered up to 50 with a 5,000x multiplier added on.

Annihilator also features a creepy bonus symbol that calls for three dolls to trigger the Fun Palace mini-game. Users can select dolls for the chance to gain multipliers and pick again. There are higher multipliers that can end the round, and this is when it’s also possible to trigger free spins by uncovering a devil image.