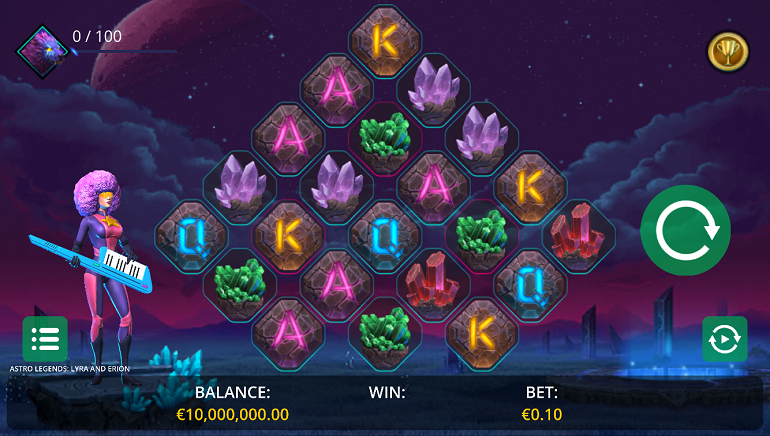 Developed by Foxium exclusively for Microgaming, Astro Legends: Lyra and Erion is a mobile friendly slot with fantastic graphics and atmospheric music.

Microgaming has just released a brand-new video slot which goes by the name of Astro Legends: Lyra and Erion. Developed by Foxium exclusively for Microgaming, the slot invites players to embark on an epic quest that will take them on an intergalactic voyage. The original theme and the stunning visuals are expected to catch the eye of prospective players and encourage them to give the reels of spin.

Astro Legends: Lyra and Erion is a mobile friendly slot, so players can enjoy it on mobile devices at any of the casinos powered by Microgaming. The slot also tells a story and at the center of its narrative are two characters who go by the name of Lyra and Erion. These trusty companions will take players on a memorable voyage through the stars, while a synthesiser soundtrack plays in the background. The developers wanted to make sure that the game captures the very essence of classic sci-fi movies.

Astro Legends: Lyra and Erion is a story driven title, but its strongest asset is the original gameplay, rich in innovative features. Wild symbols can substitute all the other signs on the reels and when they appear in winning combinations, they have the ability of multiplying winnings. Players unlock free spins which can be re-triggered during the high-stakes respins round and participate in an interactive pick bonus game.

There is an indissoluble link between the stakes and the return on investment, with players having the chance to win up to 15,000 times their bet. It is during the randomly triggered Sonic Respin feature when these top payouts can be secured. Astro Legends: Lyra and Erion was released on November 21 and given its solid game mechanics, high winnings and unmistakable charm, this slot is here to stay.