Back in 'Nam: Platoon Wild Slot Marched Out by iSoftBet 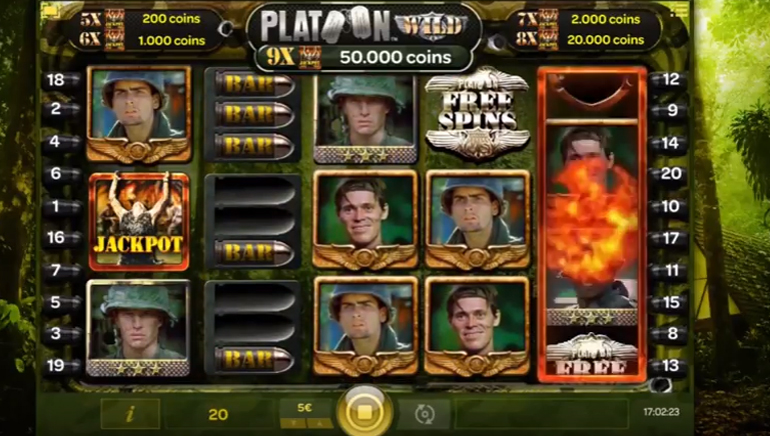 The Vietnam war spawned many films, but 1986’s Platoon is one of the most memorable. After an original release, iSoftBet has made a Platoon sequel slot.

iSoftBet has released a second video slot in its officially licensed Platoon series, which is based on the 1986 Vietnam war film starring Charlie Sheen and Willem Dafoe. Produced under agreement with MGM Interactive, Platoon Wild is an upgraded version of the original slot game from 2013.

Most of the same characters reappear in Platoon Wild, including Chris, Elias, King, and Barnes, all of whom serve as symbols. For the most part, players will win by matching standard symbols on the 20 paylines of this five-reel slot. In terms of value, each spin can be worth €0.20 all the way up to €10, as the 20 paylines are fixed.

Like most slots, this game has wild symbols to replace missing symbols – all except jackpots and free spins. To win eight free spins, players can land three or more of the corresponding symbols anywhere on the screen. During free spins, all winnings will be doubled, but this is not the case for jackpot wins.

The original version differs in a number of ways, but the most noticeable is that the cartoon graphics and cinematic images of the characters have lower production values compared to Platoon Wild. The second fundamental variation is that the original Platoon slot’s 30 paylines are 10 higher than the Wild version. However, Platoon Wild can offer a 50,000x jackpot compared to 30,000x for iSoftBet’s original release.

Players can go search for Charlie at iSoftBet powered casinos where the game should be available; some of these include Real Deal Bet Casino, PunchBets Casino and SlotsMillion Casino.