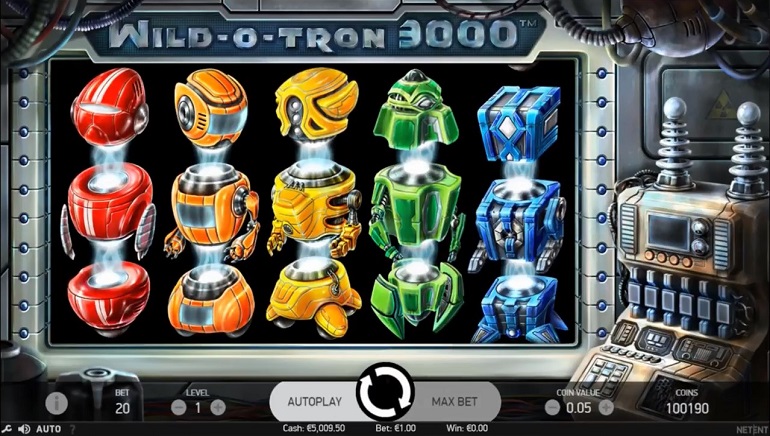 New Wild-O-Tron 3000 slot has only one feature that adds random wilds to the reels, offering a simple, moderately volatile, and straightforward gaming experience.

Over the years, NetEnt has released a vast number of slots, many of which introduced new features and game elements. With their latest release, however, the Swedish developer has decided to take a step back and create a graphically advanced but straightforward game with their Wild-O-Tron 3000 slot.

Wild-O-Tron 3000 takes players inside a 1960s robot lab, looking to evoke memories of classic movies and TV shows with sci-fi themes. Featuring 20 fixed paylines across the standard 5x3 grid, Wild-O-Tron 3000 is classic only in the theme, because symbols and animations are quite modern and well-designed.

In terms of symbols, there are six different robots appearing on the reels, with the red one being traditionally the highest paying symbol. With the classic 1960s looks, all robots are stacked on the reels, so the game does have the potential for some solid payouts.

Although some of the latest NetEnt releases have a number of different features and bonus games, the Wild-O-Tron 3000 slot is quite different. There is just one special feature in the entire game, simply called Wild-O-Tron feature, and it is triggered randomly at the start of a spin.

Players can recognize the feature by the lights going off on the Wild-O-Tron machine located to the right of the reels. The reels will slow down and the machine will pick one of the robot symbols to turn into wilds. The feature is capable of producing between 1 and 6 wild symbols every time it is triggered.

The new NetEnt's slot might not be to everyone's taste but the company wanted to produce a game with solid graphics and winning potential but a simple and easy to understand gameplay. The Wild-O-Tron 3000 slot is certainly capable of producing big wins in the right circumstances while also being a medium-volatility slot, which means it stands to offer a solid amount of play-time even with a limited bankroll.