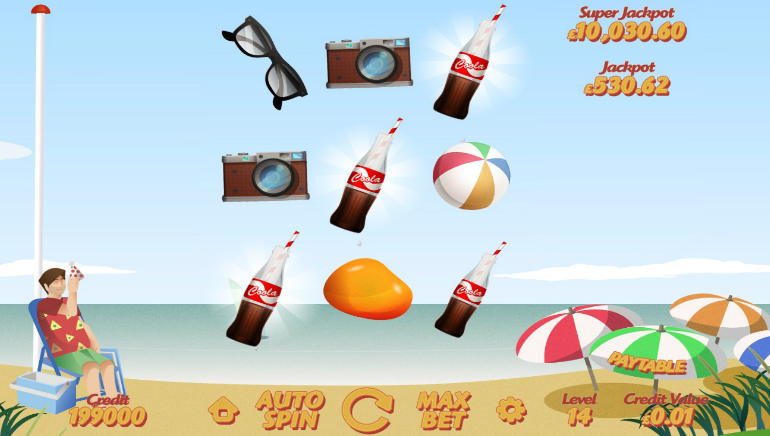 Treasure Coast is a new slot game from Magnet Gaming that features several bonus games along with a couple of jackpot payouts.

Set on a sunny beach, where holidaying characters doze against a flagpole or lie under their colourful umbrellas, it's got some simple, cartoon graphics but players can dig up some impressive bonus features.

Fun In The Sun

Symbols are arranged over 3 reels and 7 paylines run across for a conventional layout, but along with symbols of kites, cameras, ice creams and bottles of cola, there are a number of special icons that can trigger a whole selection of side games and jackpot awards when they fill a line.

Players get holiday treats such as the Lost and Found game where they use a metal detector to find buried treasures, a Forgotten Gold round where they unlock doors for some big prizes, and 25 free spins during which they plant flags in the sand with a win for each one.

A Beach Tennis bat hits a ball that lands on a range of bonus treats like cash prizes and free games, while a boat race mini-game leads to even more potential payouts.

The buried treasures include a 2 jackpot prizes that can be uncovered during bonus games, with the Super Jackpot rising to an impressive amount and even the smaller Jackpot being enough for a few days on a sunny beach.

Although Treasure Coast looks fairly simple, beneath the calm waves players will find exciting gameplay and awards to uncover.

A Few Words From Magnet Gaming

Commenting on this slot, the Head of Game Licensing at Magnet Gaming, Thomas Nielsen has said: ''Treasure Coast immerses players into the clear waters and white sandy beaches where our jackpots lie.'' adding that ''Everybody loves the thought of being on holiday and Treasure Coast offers players the next best thing. We are sure players will love hunting for those hidden jackpots and bonuses.''