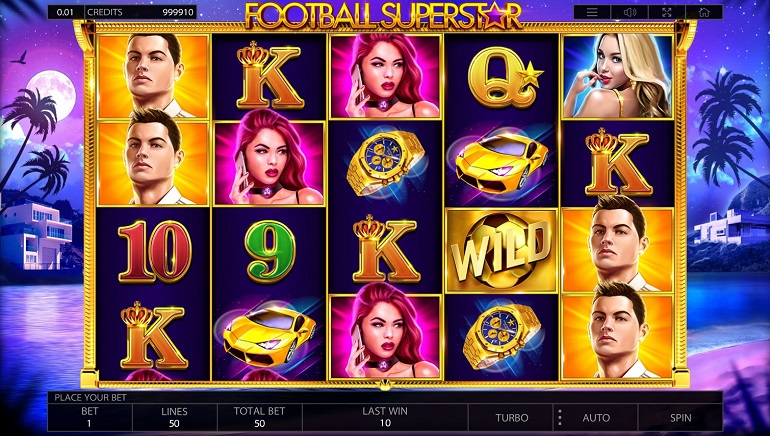 Gamers can be a Football Superstar in the brand new slot from Endorphina – get a full rundown of the game now.

Software providers from all over the iGaming marketplace are busy trying to release their new football slots just in time for the 2018 FIFA World Cup, which is going to run from 14 June until 15 July this summer.

Endorphina is the very latest provider to announce the release of a football-themed slot game that can be played during the four-week duration of the World Cup. As of right now, the brand new Football Superstar slot is now playable on desktop or mobile devices at Endorphina casinos.

The thrill of being a footballer is not longer just reserved for being on the pitch. These days, the very best footballers are idolised all over the world and are used to being snapped by paparazzi on a daily basis. This could happen in training, after winning a tournament, attending an awards ceremony, or else while sitting on the beach with glamorous models.

In Football Superstar, Endorphina has made a concerted effort to convey the star-studded lifestyle of the modern player. For this reason, the slot has a beach, palm trees, and luxury villas all appearing alongside the main interface, which has been built using five reels and four rows to deliver an expanded playing area to utilise.

The expansive dimensions have allowed for Endorphina to integrate 50 adjustable paylines into Football Superstar. There is a football star as the main symbol, but he is also joined by a couple of models, sports cars, gold watches, and a trophy. In addition, there are playing card symbols that run from 9 to ace.

Football Superstar also uses a wild symbol that is designed to appear on the second, third, fourth, and fifth reels. The purpose is for the wild football to substitute for other symbols, but this is not possible for the scatter symbols.

The scatter has been designed as a golden trophy that can deliver 10 free spins once five symbols have appeared anywhere on the first, second, or third reels. After a victory, it will be possible to risk the winnings to try and earn more from a card-based mini game.