Become the Only King with Microgaming's New Forbidden Throne Slot 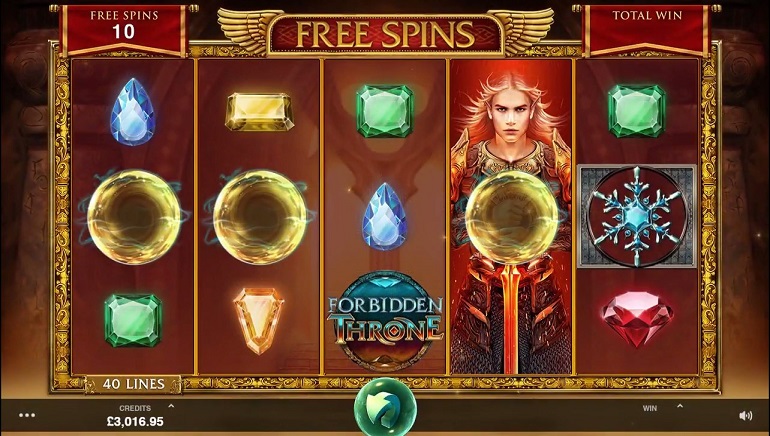 It's been a little while since Microgaming has released a new slot, so we've all been expecting them to surprise us with something any day now. The awaited surprise has arrived in the form of the Forbidden Throne slot, the game that is guaranteed to keep all your senses busy as you spin the reels.

The first thing you'll notice when you get started with Forbidden Throne is the powerful, edgy music playing in the background. It will make every spin feel that much more relevant, as you try your best to land a big win and sit on the throne.

As for the graphics, the game is set on transparent reels featuring masterfully designed symbols like Amber Amulet, Spell Book, Snow Flake, and various colorful gems. This is in addition to stacked wilds which cover the entire reel and feature a Phoenix, a Unicorn, the Elf King, the Ice Queen, and a Castle.

All in all, Forbidden Throne won't fail to impress with its combination of audio and visual elements, which make this game a real pleasure to play even when you disregard the winning possibilities that can be found in abundance with this slot.

Forbidden Throne comes with standard five reels and forty paylines. The game can be played from just $0.40 per spin all the way up to $800, making this game equally appealing to casual players and high-rollers.

The game features unique Wild Reels, and at least one Wild Reel is guaranteed on every spin. Every particular symbol has its fixed position, so the Unicorn will always come on the first reel, the Phoenix will fall on the last reel, etc. Combined with the standard wild symbol, represented by the game logo, Forbidden Throne promises some big wins if you land a spin with a few Wild Reels in place.

The game's main bonus feature is the free spins round which is triggered by at least three scatters, Magic Portals which will transform into the Forbidden Throne, landing anywhere on the reels. You can get between 10 and 30 free spins, which depends on the number of scatters you land. There are no special boosters that are active during free spins, but you can re-trigger the bonus indefinitely, which can lead to some huge, risk-free wins. You can find Forbidden Throne at Microgaming-powered casinos.