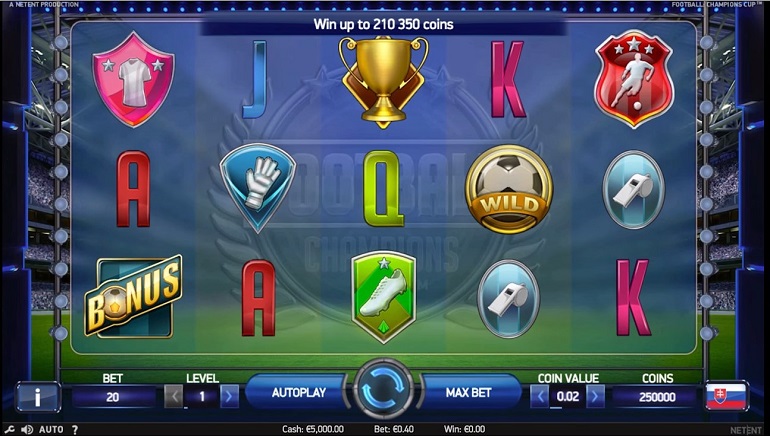 Football fans have a brand new slot to experience at bet365 Vegas. Throughout Euro 2016, Football: Champions Cup is a themed slot complement to the tournament.

Euro 2016 will begin this Friday 10 June, with tournament hosts France due to face Romania. For fans who want to add to their experience, NetEnt has created a themed online slot entitled Football: Champions Cup. This game has been released at bet365 Vegas, arriving just in time for a thrilling summer of football.

At the start of the game, players are given the freedom to select their favourite international team. Fittingly, the 24 teams are all participants in Euro 2016. Moving forward, NetEnt could adjust the selection for future tournaments, such as the next World Cup.

After picking a team, the game itself will then begin. At first glance, it is obvious that the experience is set inside a packed stadium, with the five-reel slot interface overlaid. This displays 15 symbols at once, with players required to stake on 20 paylines.

Football: Champions Cup even has a penalty shootout bonus game that is made up of five rounds. In each round, the player choose one of four places in the goal to try and score past the keeper. The next challenge is to be the keeper and try to save the next shot. To launch the game, land three or more bonus symbols.

For free spins, players can land three scatter symbols on reels two, three, and four. The setup for this feature will see players try to advance through four rounds of free spins to try and win an overall coin prize. The final features are the wild symbols and overlay wilds, of which two and five can appear.