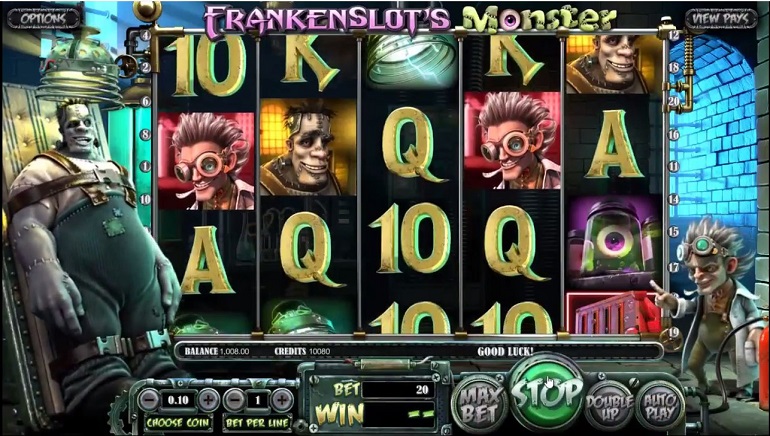 Ever since Betsoft Gaming announced its development of a new FrankSlot’s Monster slot game, players have been eager to try their hands at it. Finally, the wait is over. FrankenSlot’s Monster is now available for play at Betsoft online casinos such as SlotJoint Casino, Golden Spins Casino and Playamo Casino.

What makes this game so enticing is its eerily familiar theme - Frankenstein - combined with the potential for winning lots of cash and Betsoft’s crystal clear high definition graphics and animations. The spooky sound effects also heighten the suspense and excitement in this fun version of the classic monster tale.

The slot itself is made up of 5 reels, 20 paylines, and lots of special features. In the interactive bonus round, players can manipulate the levels and switches that control the actual monster, which can help them score up to 25x their line bet win. Other special features include free spins, scatters and wilds.

Betsoft’s VP of Sales and Marketing, Mark McKeown, commented, “Retelling favorite stories is as old as humankind itself, and to create a game based on such a well-known tale was a satisfying experience at every level of development. The animated background of the game intensifies the spookiness of the secret underground laboratory theme and the inimitable characters celebrate wins right along with the player. We are certain that these special touches – for which we are globally known – will please players of all demographics.”

Betsoft Gaming is known in the iGaming industry as a Tier 1 developer and a pioneer in 3D cinematic gaming. To date, their game library consists of over 180 games, including the renowned Slots3 video slots series, most of which are available in their mobile ToGo collection. Betsoft serves a wide range of international clients, including some of the top gaming operators in the industry.