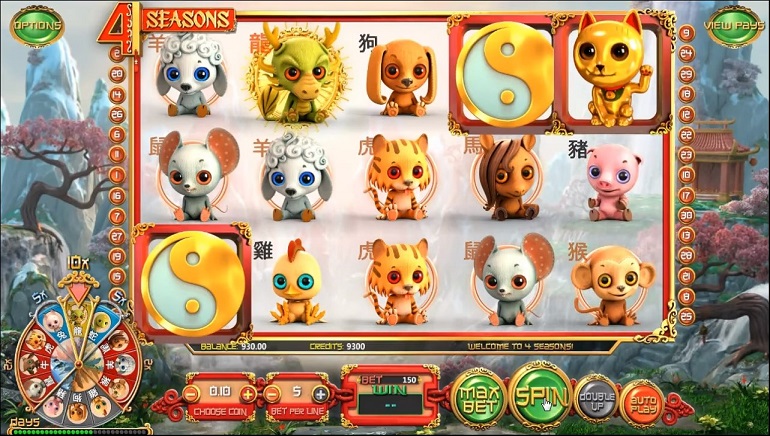 Betsoft Gaming has announced the release of its newest slot game, 4 Seasons, which joins the ranks of Betsoft’s Slots3 collection of video slots.

Betsoft Gaming has announced the release of its newest slot game, 4 Seasons, which joins the ranks of Betsoft’s Slots3 collection of video slots. At the same time of the 4 Seasons release, Betsoft also launched the mobile version of Slots3 game, Barbary Coast.

Betsoft’s newest slot game has 5 reels and 30 lines, and no, the title does not refer to the popular hotel chain, but rather, it refers to the lunar year and pays homage to the Chinese zodiac, with the 12 animal signs of the zodiac playing an important role. Special features include Lucky Golden Cat Wilds, Yin Yang Free Spins, and a shifting background that changes every 90 spins, as if entering a new season.

Another exciting feature in 4 Seasons is the Seasonal Wheel, which bears the 12 signs of the zodiac, and turns every 30 spins, which simulates the passing of a month and marks that month’s animal as Golden, which means a 10x multiplier. The animals to the left and right of the Golden animal become Silver, which means they will be worth 5x the original value.

Betsoft’s VIP of Sales and Marketing, Mark McKeown, commented, “4 Seasons is a remarkable video slot. With such innovative features and detailed 3D modeling, the game is certain to be a popular choice among today’s players...4 Seasons is a prime example of our work, proving that, once again, if you want the best in the business, you want Betsoft.”

Betsoft Gaming is known in the iGaming industry as the leader of true 3D cinematic gaming. To date, their game library consists of over 180 games, including the Slots3 video slots series. Betsoft serves a wide range of clients, including some of the top gaming operators in the industry.