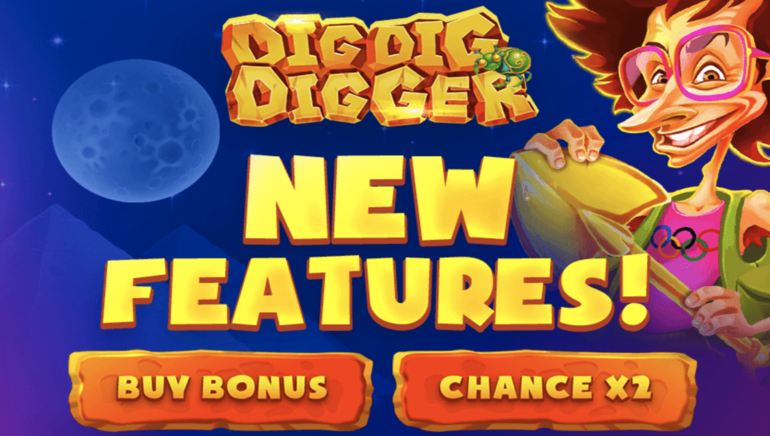 Fans of BGaming's popular title can now buy bonus features and increase their chances of landing the bonus in the base game by using the Chance x2 feature.

One thing that all online casino players expect these days is the innovation. Gaming studios have to keep up with these expectations to stay interesting and relevant, especially given how much competition there is out there. In that vein, BGaming has been upgrading some of its popular slots with new features and Dig Dig Digger is one of the latest titles to benefit from these improvements.

The most important changes added to the Dig Dig Digger slot have to do with the bonus feature. BGaming has decided to make things more exciting for the players who don't like sitting around and waiting for the feature to drop by introducing the bonus buy option.

So, now, players can simply buy a bonus whenever they feel like it. Not only that, but they can choose the number of expanding symbols to be active in the bonus, which can be anywhere from just one to nine.

For those players who enjoy watching the reels spin but still want more frequent bonuses, there is the Chance x2 feature. When activated, this feature doubles the base bet, but it also increases the odds of landing the bonus.

Both of these new features were introduced based on the feedback from the players. The company took the time to analyze player preferences and what they found is that most players prefer to have a chance to buy the bonus feature even if they don't use it all the time.

BGaming has already implemented the bonus buy feature on some of their other popular titles like Aloha King Elvis. Following a great feedback on that change, they decided to do the same for the Dig Dig Digger slot, a game that was originally released back in May and has been quite popular with the players.

In fact, the developer has already announced the sequel for their game inspired by the funny Digger. The main character in this game is a quirky archeologist who helps boost the gaming experience with witty comments and jokes.

Those who are really into this game can also take on the role of the funny Digger on Instagram, where BGaming has prepared an Instagram mask for the title. As for the sequel, there is still no official release date, but players can bank with the fact it will be coming out in the near future.