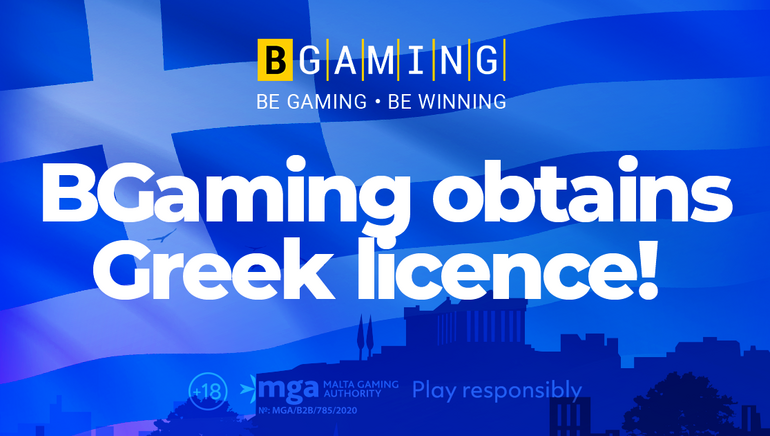 Moving forward, Greek players will have access to the full portfolio of 70+ BGaming titles, including bih hits like Elvis Frog in Vegas, Aloha King Elvis, and Fruit Millions.

In a move to expand its presence in the growing online gambling market, BGaming has received Type A1 license for the Greek market. The license was awarded by Hellenic Gaming Commission, the country's main regulatory body, and makes it possible for the studio to roll out its titles for Greek players.

This marks an important step for the company as BGaming has been looking to increase its visibility and has recently been awarded a Critical Supply License by the Malta Gaming Authority (MGA), the leading regulatory authority for international online casinos and game suppliers.

Staying Ahead of the Curve

BGaming has been working hard to expand to newly-regulated markets in Europe and obtaining a license from the Hellenic Gaming Commission is an important step on that journey. Moving forward, players in the country will have access to supplier's popular titles like Aloha King Elvis, Fruit Millions, Elvis Frog in Vegas, and more.

The studio has been very productive in terms of new releases as well. In 2021, BGaming has created a dozen new titles, and they already have plans to launch Space XY in early 2022, which will be their first crash-style game.

While the competition is fierce in the iGaming space, the company has taken certain steps to help them stand out and stay ahead of the curve. They became the first game supplier to fully support cryptocurrencies and offer provably fair games. This seems to be the trend towards which the industry is moving, and BGaming jumped on the train early on.

Focus on the Player

On its journey, BGaming has tried to stay focused on what matters the most, which is the player as the end-consumer of their products. With the idea of converting gambling into gaming, the studio has produced over 70 titles, featuring top-quality graphics and engaging features to ensure a pleasant gaming experience.

Thanks to this approach, they have managed to create partnerships with reputable gaming platforms across the globe. Today, BGaming titles are featured at more than 550+ safe and licensed online casinos, and that number is virtually guaranteed to increase in the future. It goes without saying that all the products are compatible with mobile devices, answering to modern iGaming market demands.

Moving forward, the company will seek to further improve its footprint in Europe and elsewhere. According to Marina Ostrovtsova, the company's Executive Director, BGaming will continue on its journey to enter new regulated markets, and with everything they've achieved so far, there is no reason to doubt these plans will be successful.