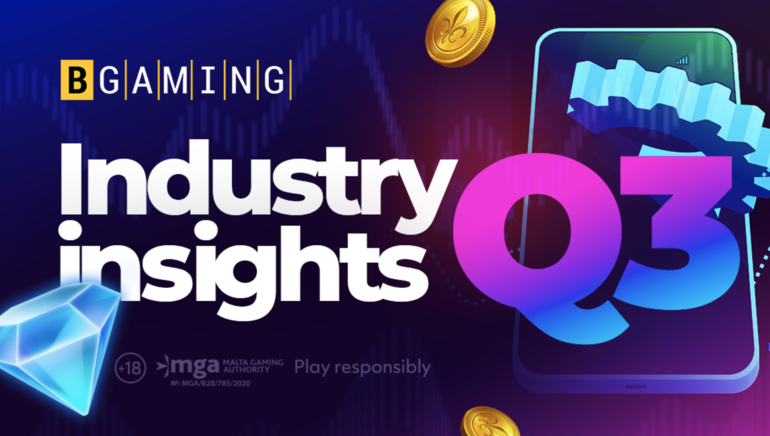 BGaming’s latest report highlights the accelerated growth of cryptocurrency gambling and the preference of online gamblers for mobile devices.

BGaming is a respected game provider and partner to hundreds of respectable online casinos. It supplies them with state-of-the-art software and engaging games that quickly get players fully immersed in the gaming atmosphere. The company takes great pride in its ability to convert gambling into gaming while identifying the latest iGaming tendencies. Its most recent report analyzes the strongest industry trends in the third quarter of 2021. These are some of the most important conclusions at a glance

BGaming was the first game provider to support cryptocurrencies and it provides punters with a fun and secure environment to gamble digital money. It is also the first to offer provably fair games, which adds another layer of confidence and transparency. Being a pioneer in this fast-changing and immensely lucrative industry has its benefits. BGaming has expanded its network of crypto projects and the positive results provide the impetus to double the efforts.

Cryptocurrencies have gained a lot of traction in recent years as more people started to realize the advantages of blockchain technology. Bitcoin continues to be the most popular coin as it is a valuable currency for trading as well as investments. For gambling purposes, Litecoin stands out from the crowd as the altcoin with the most accelerated growth. It grew in popularity by 49% in the third quarter of 2021 alone, second only to Tether which increased by roughly 108%.

Smartphones continue to rank high in the preferences of modern punters. This is one of the conclusions formulated by BGaming and it is unlikely to send shockwaves of surprise. That’s because mobile gaming has been the driving force of the online gambling industry for several years in a row. What is important to highlight is the fact that an overwhelming majority of their punters decided to play on handheld devices. Apparently, nearly 95% of them preferred smartphones, while computers amounted to roughly 3%.

The demographics have also changed over the last few years and young adults represent an important chunk of the pie. BGaming researchers determined that the number of people from this age group playing on their platform has increased. The numbers suggest a 6% surge over the past year, which is reassuring because these players represent both the present and the future. Younger adults play more often and bet larger amounts, which is a clear sign that they have wholeheartedly embraced Internet gambling. iGaming suppliers have also noticed this trend and try to produce games that will appeal to the young audience.

BGaming follows the same direction and the development team relies heavily on the analytics collected by their colleagues. By paying attention to how the demographics change and what the surging group demands, they are able to deliver immersive games. Everyone loves original titles and this remains at the cornerstone of their game collection. WBC Ring of Riches, Lucky Dama Muerta, and Dig Dig Digger are some of the most popular slots released by them. Aloha King Elvis has emerged as the game with the fastest growth, after building on the popularity of Elvis Frog in Vegas. The sequel brilliantly captures the very essence of the original, while introducing three new jackpot games and two types of free spins.