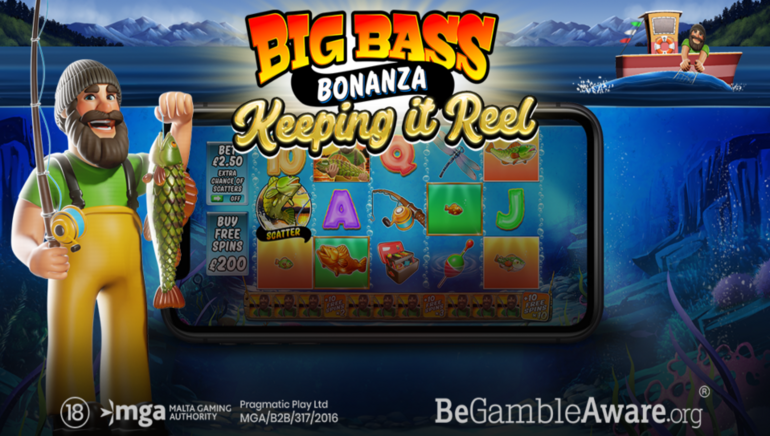 Pragmatic Play has a massive portfolio of mobile-friendly games enjoyed by millions of people from all over the world. Slots dominate the collection of games and among the eye candy titles, punters will recognize some famous game series. Big Bass Bonanza Keeping It Reel is a shining example that captures the very essence of the original and builds on it.

The slot adds an important chapter to the industry’s finest fishing adventure and it can be played at the best casinos powered by Pragmatic Play. The 5x3, 10 payline slot brings the iconic fisherman back into the spotlight, as it embarked on another request. Players who join him on this adventure have a chance of reeling in untold riches in this fast-paced slot.

Big Bass Bonanza Keeping It Reel is a beautiful slot entirely dedicated to fishing and its fans. The symbols populating the rails include everything from floats, tackle boxes, and flies to rods and reels. Behind the charming graphics and immersive animations, players will discover a game with solid mechanics and an abundance of special features.

Three scatter symbols are needed to trigger free spins and up to 20 of them can be awarded. Golden Wilds serve an equally powerful role, as they are the catalyst for out-of-the-ordinary catches during the bonus round. There are several levels for players to climb in their quest to unlock massive multipliers, while the maximum win is equal to 10,000 times the states.

Big Bass Bonanza Keeping It Reel is first and foremost a fishing-themed game that continues the legacy of the original. Pragmatic Play made sure that fans will instantly recognize it as a continuation of the immensely popular slot. At the same time, they added new features, which brilliantly succeeded at keeping the game fresh, while appealing to new punters.

2022 was a great year for the developer and Big Bass Bonanza Keeping It Reel continues an exceptional period. The mix of new features and great multipliers, layered on top of charming visuals that evoke memories of a classic is the recipe for success. The company maintains its high production tempo with up to seven new slots released every month. Pragmatic Play’s portfolio also includes a burgeoning selection of bingo and live casino games.