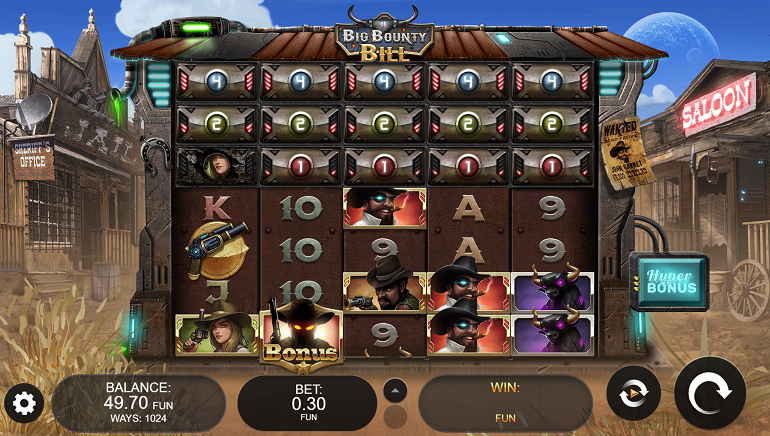 Retro-futurist is the term used to described Big Bounty Bill, a brand new video slot adventure from Kalamba Games. Although depicting the Wild West, Kalamba’s Big Bounty Bill slot has innovative elements that give it a futuristic feel.

The story centres on Big Bounty Bill journeying into the Badlands, during which time he will take on a cast of originally created villains. Players will have the option of playing in one of 25 languages, while compatibility has been secured for smartphone, tablet, and desktop.

A twanging banjo introduces an Old West setting that is brought into the present with neon signage, satellite dishes, robotic eye patches, and laser-scoped pistols. Initially, the game starts off with an interface consisting of five reels by four rows. Above that, however, are three more rows that can be unlocked later with the aid of special features.

Wagering commences from €0.30 and rises through increments up the $300.00 maximum. Kalamba describes the slot as nine out of ten for volatility, while the return to player rates at 97.33%. Armed with a 5,000x top multiplier, Big Bounty Bill can provide 16,807 possible ways to win.

Obtaining three, four, or five Expansion scatter symbols can deliver three, five, or seven HyperSpins, respectively. Expansion symbols can be collected for each of the reels and this is how they can eventually be expanded to open up the full interface. Wild symbols can fill in for the majority of symbols, but not for the scatters.

With three Bonus scatters, it’s possible to trigger eight free spins and a 2x multiplier. At this point, Expansion symbols can add spins. Another way to reach free spins is simply to pay for them via the Hyper Bonus function. Prices are quoted according to whether players desire eight, 15, 20, or 25 free spins.