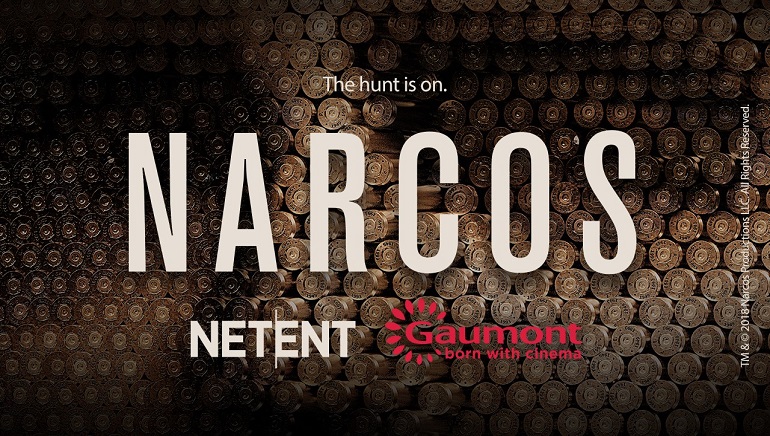 Both games are being developed in cooperation with two studios behind the shows, ensuring players will get the experience they expect and deserve.

NetEnt, a casino game developer with a number of successful titles based on popular TV shows and movies took an opportunity at this year's ICE in London to announce their new Narcos slot. The game is being developed in cooperation with Gaumont, one of the oldest film companies in the business and the producer of this hugely popular TV series.

Alongside Narcos, NetEnt has also announced they will be releasing the Vikings slot, another game based on a popular TV series, towards the end of 2018. Vikings are being developed in cooperation with A+E Networks and they'll bring exploits of Ragnar Lothbrok, Floki, and others to the reels.

Also announced is a VR version of one of NetEnt's most popular slots, the iconic Gonzo's Quest.

Expanding Their Player Base

Narcos is currently one of the most-viewed series around the world with people from more than 130 countries having access to it via Netflix. The show is currently in production for the fourth season and it has achieved acclaim from viewers and critics alike, getting nominated for Golden Globe and Emmy awards.

NetEnt seeks to bank on this popularity and expand its players' base thanks to it. According to company's Chief Product Officer Henrik Fagerlund, the series has a huge fan base across the globe, which provides NetEnt with a whole new demographic they can market their games to.

Gamount seems equally enthusiastic about this latest partnership. Based on NetEnt's track-record and experience, they are convinced the Swedish company is capable of developing a game that will give the fans a new, different way to enjoy and experience Narcos.

Describing adventures of Ragnar Lothbrok and his sons, Vikings is another TV show that's has quickly become one of the favorites among viewers from all corners of the globe. Successfully mixing history, myths, legends, and fast-paced action, Vikings tell the tale of the epic adventures undertaken by tribes of raiders and explorers during the Dark Ages.

Thanks to the deal with A+E Networks, NetEnt will be able to bring these adventures to life on slot reels later this year. Like with Narcos, Fagerlund is convinced Vikings will find a great response from the existing playing audiences and create opportunities to tap into new demographics.

Announced this morning, Gonzo's Quest VR is slated for a summer 2018 release; it is meant to be an industry first due to it being available through a web browser that doesn't demand any special integration by operators or special apps downloaded by players - that's web VR for you.

In the press release accompanying the announcements, NetEnt emphasized it is their desire to keep pushing the boundaries and continue creating branded content that appeals to wide global audiences. Although Narcos is one of their biggest deals to date, the company has already released quite a few branded titles, including the new Planet of the Apes slot and recently announced Jumanji and Vikings.

There are currently no details about the slot engine and what we can expect from Narcos in terms of gameplay. However, those attending ICE 2018 in London can visit NetEnt's stand from February 6-8 and find out more about the new slot that has a serious potential to become a proper blockbuster once it goes live.

As for the Vikings slot, it is definitely too early to tell, since the company announced it will be coming out towards the end of the year. However, given NetEnt's success with other branded slot, we can probably expect plenty of action-packed cut-scenes, original music, and bonus features that will bring out the Viking within us.