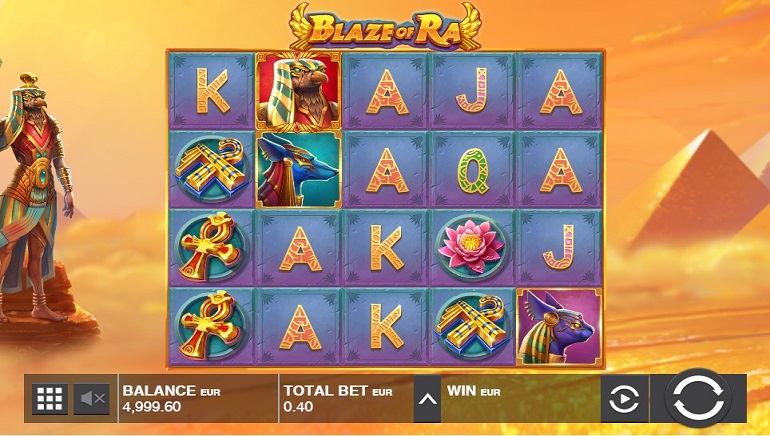 There’s a lot of enthusiasm brewing around the Egyptian themed slots at online casinos. Push Gaming is one of the software developers fueling this craze and it does so for all the good reasons. The latest game produced by this company goes by the name of Blaze of Ra and it is a modern 5 reel, 40 payline slot. Just as the name indicates, it invites players to travel back in time to the days when the ancient Egyptian civilization was at its peak.

A quick glance at the background of Blaze of Ra will reveal the fact that action will unfold under the hot sun of the desert. Players can further turn the heat up by betting as much as £100 per spin, for a chance to unlock the biggest payouts. At the opposite end of the spectrum, beginners and casual players can stick to smaller amounts of no more than 20p. The size of the stakes influences the potential payouts, with five bird god Ra wild symbols producing payouts of 50 times the bet.

In addition to producing the aforementioned payouts, the Ra wild symbols are also responsible for triggering the Nudging Wilds feature. Whenever they appear in the top two positions on any reel before the game commences, the special round is triggered. Scatter symbols, which are depicted by the scarab beetle in Blaze of Ra are the ones capable of generating free spins. During these bonus rounds, the odd reels become stacked wilds, so even more free spins can be unlocked.

Push Gaming has done a brilliant job at capturing the very essence of ancient Egypt with its latest releases. Blaze of Ra stands out from the crowd of the games inspired by the Egyptian civilization with its great graphics and remarkable soundtrack.