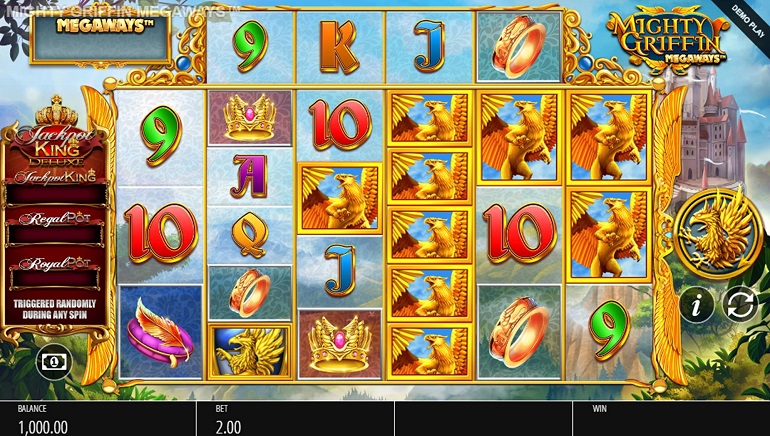 The Mighty Griffin Makes an Entrance

Mighty Griffin Megaways features 6 spinning reels and 117,649 paylines. This thematic video game takes place in ancient Egypt where age-old mystical elements are brought to life in spectacular fashion. With wild and scatter symbols, multipliers, bonus spins, and Autoplay functionality, players are treated to a delightful ensemble of attractions. Mighty Griffin Megaways has a minimum coin value of 0.01 and a maximum coin value of 1.00, with 100 minimum coins per line. The jackpot stands at a cool 250,000, although it's not a progressive jackpot game.

A sparkling combination of fantasy-laden elements is peppered across the reels, including the Golden Griffin, the Crown, Golden Rings, Phoenix Feathers, 9, 10, Jack, Queen, King, and Ace symbols, and more. With an RTP of 95.95%, this newly-released video slot adventure is a feast of fun for online casino fans. Blueprint Gaming successfully conjured up a mythical creature in Mighty Griffin, with lots of colours splashed across the reels to keep players immersed in the action. In total, 10 standard symbols appear in the game, including the mystery symbol – the Blue Orb – which can transform into standard symbols.

The Wild symbol is the Mysterious Book. Wild symbols can replace other symbols, and form winning combinations. The Scatter symbol is the Griffin, and when players land 3+ Golden Griffins, the bonus spins round is activated in Mighty Griffin Megaways slot. Once the reels start spinning, symbols will form in a cascading-style system. All symbols are removed, and replaced by new symbols on the reels. The presence of win multipliers can substantially boost your winnings, making for an enthralling gaming experience.