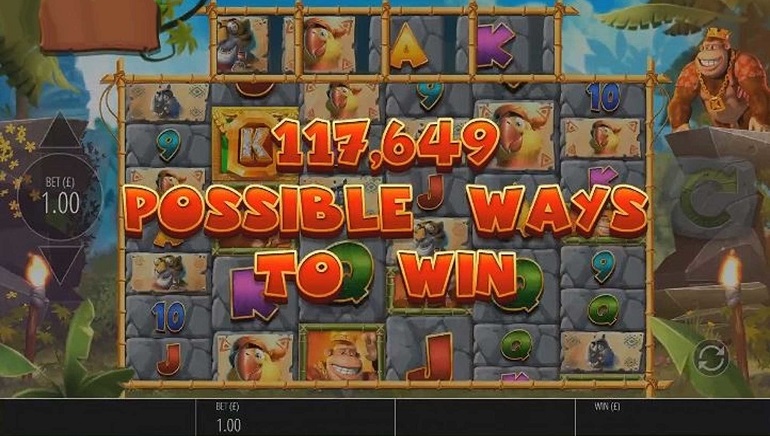 Blueprint Gaming will release Return of Kong Megaways™ as the sequel to King Kong Cash, a colourful slot featuring apes and other wildlife.

Blueprint Gaming is following up its King Kong Cash slot with the release of an innovative sequel experience. Return of Kong Megaways™ promises to expand on the original by providing an expanded slot interface with many more reels and rows to spin.

Return of Kong Megaways joins a diverse portfolio of the other Blueprint slots, such as ThunderCats™ Reels of Thundera, Deal or No Deal: Double Action™, and Tiki Treasures Megaways™, plus others besides those.

Kong Back for More

In this adventure, lead character Kong returns with the mischievous cast from the first slot in the series. Those to feature include a tiger, rhino, and parrot. Other symbols include playing cards that can also be used to match up over the reels.

The developer has created the Return of Kong Megaways slot with six reels, which is one more than the average video slot. In the base game, there are spaces for five symbols on the middle four reels. Meanwhile, the first and last reels play host to four symbols.

For this release, Blueprint has opted to license the uniquely developed Megaways™ setup devised by Big Time Gaming. What this means is that players will have the chance to win from a seventh reel at the top of the screen. With seven reels in play, Return of Kong Megaways™ will have up to 117,649 ways to win.

Kong is known for being partial to shiny jewellery, and this is why Blueprint has added a gold medallion symbol to trigger free spins. Three golden symbols are needed to make that happen and will guarantee at least 1,000 Megaways™.

Return of Kong also has a cascading function where winning symbols are blasted away to be replaced by new ones. At the same time, there is a rising multiplier that increases with every consecutive win.