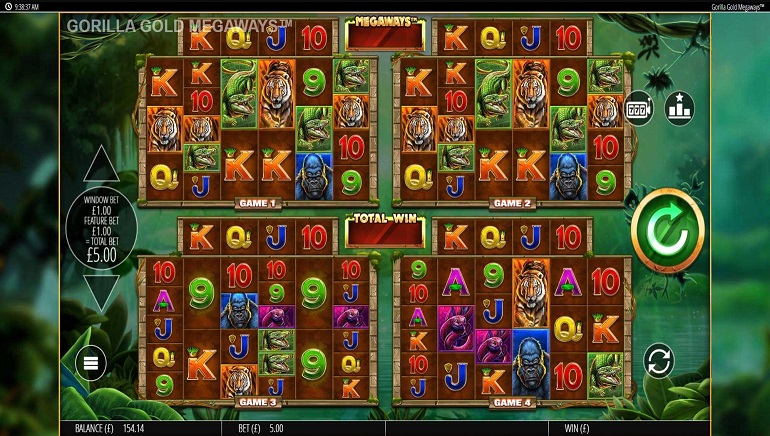 In Gorilla Gold Megaways, Blueprint Gaming is giving players the chance to win in 470,596 different ways with the Power 4 Slots mode.

Blueprint Gaming has developed one of the most ambitious concepts ever created with the release of the Gorilla Gold Megaways slot. What makes the video slot so innovative is its use of Blueprint Gaming’s cutting-edge Power 4 Slots mode, whereby users can play over four sets of reels all at once.

By including Power 4 Slots, this means that the Megaways feature can now offer even more ways of winning. Having combined four slots in one, Blueprint Gaming has ensured that Gorilla Gold Megaways will carry the potential for players to win from 470,596 different ways on a single spin.

Developed with a jungle theme, Gorilla Gold Megaways has four separate slot interfaces. Each of those has six reels by six rows as standards, with forthcoming symbols displayed above each reel. Within the slot game, the symbols can potentially expand to fill up more than one position.

When delving into the special features, players will find that the appearance of at least four diamond scatter symbols on any of the four slots will trigger the lucrative Gorilla Gold bonus round. Within the bonus round, there’s a spinning wheel that provides free spins or super spins.

An interesting aspect of the spinning wheel is that players can elect to gamble their reward for the chance to maximise their return and claim up to 30 super spins or 35 free spins. During both special features, Blueprint shall activate an unlimited win multiplier and will enable cascading symbols to further boost the potential of winnings.

A further special feature to watch out for is the collection of golden monkeys. By collecting golden monkeys, players will raise their chance of opening up additional sets of reels while super spins are activated. Should that happen, the slot shall also provide five extra spins that players can benefit from.