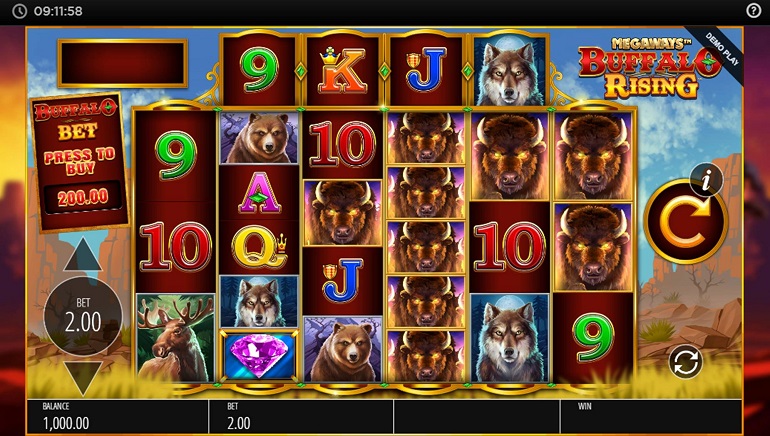 Buffalo Rising Megaways has been a top-performing slot for Blueprint Gaming and it's just been announced as the latest addition to their Jackpot King series of games.

This 6-reel slot still offers between 64 and 117,649 ways to win, cascading symbols, and free spins, but players can now grab any of 3 progressive prizes from a multi-level jackpot round.

A New Version Of A Hit Slot

Outside the UK, Buffalo Rising Megaways is the most successful Blueprint Gaming slot of all. The combination of North American wildlife on the reels, exciting Megaways system, and thrilling bonuses have ensured its continued popularity since the game first launched in 2018.

While the base games and free spins are the same, players will now find that any 5 or more Jackpot King symbols are enough to trigger the progressive prize round. It starts on a new set of reels where they collect crown symbols, and if they grab 15 crowns before the end, they enter a Wheel King feature. It's here that any of the 3 progressive jackpots can be won on the spin of a bonus wheel.

Join The Hunt For Jackpots

Other games in the hugely popular Jackpot King series include The Goonies, Ted, and King Kong Cash. A small percentage of all stakes across these and other Jackpot King slots is put into a 'pot', waiting for lucky players to trigger the feature and claim the jackpots.

Jo Purvis, Director of Marketing and Relationships at Blueprint Gaming, said: “The charge is on as Buffalo Rising Megaways™ makes its welcome entry to our series of Jackpot King titles.

“The original title with its cascading reels and classic theme proved to be very popular with a wide range of players. We’re fully expecting this latest Jackpot King version to resonate with a new audience, as has been the case with a number of existing titles that now feature the leading progressive jackpot system.”