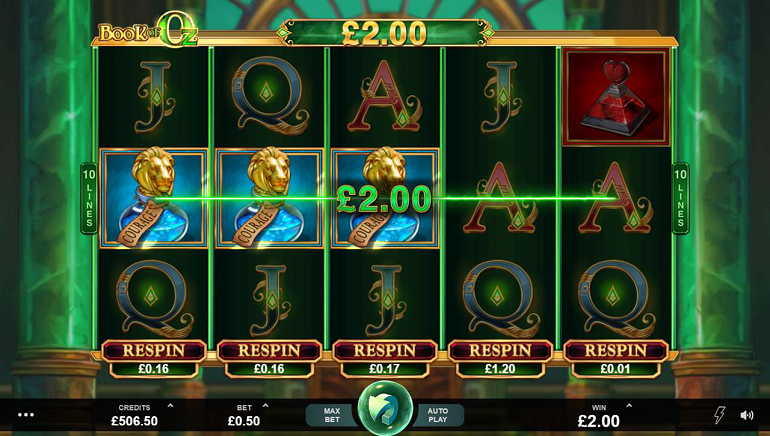 Wizard of Oz fans have a new slot game to play this December at Microgaming casinos – the Book of Oz is now live on mobile and desktop.

From mid-December 2018, Microgaming casino sites can provide access to the brand new Book of Oz slot. Now live and available to play, Book of Oz is steeped in undertones from the Wizard of Oz series and comes from Triple Edge Studios, a company which develops games independently for release at Microgaming casinos.

A World of Fantasy

Book of Oz is a slot steeped in fantasy and enchantment, with players entering a world in which the outcomes are determined by five reels and three rows of symbols. Following the release, it was revealed by Microgaming that Book of Oz is a high-volatility slot made to include 10 paylines and which is compatible on desktop and mobile screens.

The slot harkens back to the Wizard of Oz series by integrating a number of specially themed symbols, including a wizard with a golden magic book, a love potion, and a lion of courage. Beyond those, Triple Edge Studios has also integrated substitute wild symbols and scatters for the purpose of running special features.

In fact, the wizard’s book has been included to function as a wild and a scatter symbol. When the book is not substituting for missing symbols, the appearance of three, four, or five scatters can potentially provide players with 10, 12, or 25 free spins, respectively. For players, the free spins feature can lead to wins of up to 5,000x times their stake.

Triple Edge Studios has also added an innovative feature that allows for players to determine when a re-spin can occur. Quite simply, this works by letting players pay to re-spin a single reel immediately after the prior spin. Players are allowed to do this after any spin, thus giving them the chance to match five symbols when they have only gained four on the previous turn.