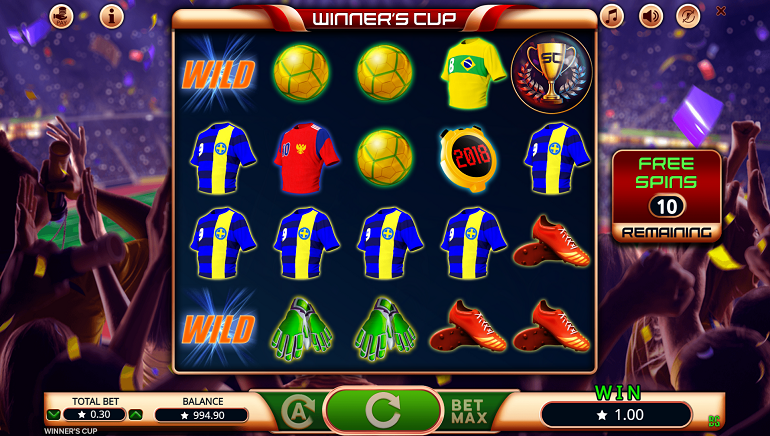 The Winner's Cup slot is a great game to get you in the mood for the upcoming World Cup but the developers could have certainly done more in terms of features.

The World Cup 2018 is the 21st edition of the world's biggest festival of football. The Cup kicked off last week and everyone is looking to get in on the hype. The online gambling industry is no exception as we've been seeing an increase in games and other casino products featuring a football theme. The Winner's Cup slot by Booming Games clearly belongs to this group.

Football Fever on the Reels

Released just a couple of days before the start of the 2018 World Cup, Booming Games' Winner's Cup slot tries to capture the football fever that is going to take over the world in the following weeks. With the reels set inside a goal and loud chanting of the fans in the background, the game replicates the atmosphere one would expect while actually cheering their national team to victory.

Symbols on the reels help reinforce this feeling. Different national team jerseys with numbers and names that true fans will surely recognize act as high paying symbols. Lower paying symbols are represented by other items from the football world, such as the referee's whistle, goalkeeper's gloves, and balls.

Booming Games designers did a fine job with Winner's Cup in terms of graphics and animations but the slot is somewhat lacking in special features, especially given the theme of the game. The slot features 30 paylines on a 5x4 grid and 10 of these are vertical lines that come with special multipliers up to 5x.

Other than this, there are free spins triggered by landing three or more Winner's Cup scatters (the Cup symbol), but there aren't any special features active during the free spins mode.

True football fans might feel a bit disappointed here as the game promises a lot but doesn't really deliver in terms of features. You'll definitely enjoy the atmosphere of Winner's Cup but if you were expecting penalty shootouts or similar special features that would fit in naturally, you won't find them in this slot.