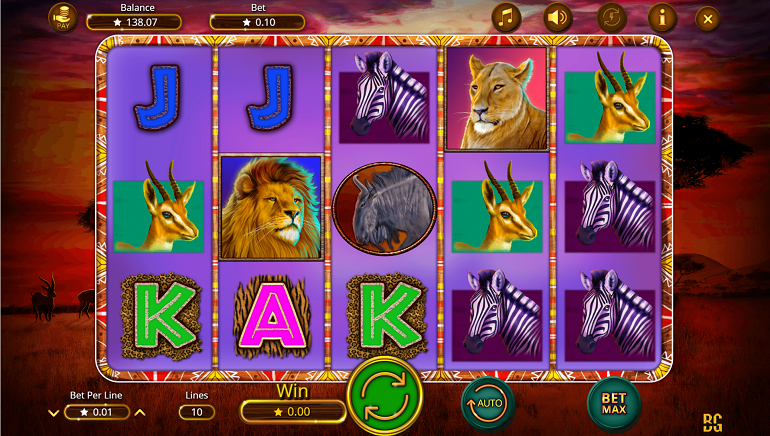 Simple and relaxing, Wild Pride offers players a chance to enjoy their time without too much stress and with plenty of small wins to keep them going.

Taking you to the heart of sub-Saharan Africa, new Wild Pride slot by Booming Games is one of those games that has a familiar feeling to it, but that doesn't take away from its appeal. With 10 paylines, reels filled with lions, zebras, antelopes, and a couple of bonus features, Wild Pride promises a fun ride.

For some reason, most slots featuring a wild life theme seem to be in the category of 40+ paylines and higher volatility. Wild Pride stands out from this group, as there are only 10 fixed lines, which makes keeping up with what's going on on the screen somewhat easier.

The reels are set on a backdrop of African savanna basking in the rays of the setting sun, bringing whole game to life. Lively but relaxing music playing in the background adds to the feeling, putting you in a position of an observer who was given a chance to admire the beauty of the untouched, wild nature.

One thing that some may not like is that the slot is fairly slow, which is further emphasized by frequent big win announcements for anything above 5x the total stake, which can be a bit irritating.

Not Made for Huge Wins

In terms of features, Wild Pride has two of them. One is called Majestic Win and it is triggered whenever you land a lion and a lioness right next to each other anywhere on the reels. The Majestic Win feature will pay five times your total bet.

The free spins round is triggered by landing three or more scatters, represented by the African Buffalo symbol. Interestingly enough, there is nothing to make this symbol stand out from the rest, so you'd have a hard time guessing it was a scatter without looking at the paytable. Initially, players are awarded 10 free spins with a 2x multiplier, and the bonus feature can be re-triggered indefinitely.

All in all, Wild Pride isn't a slot designed for huge wins, although the fact symbols are stacked adds something to its potential. This game will give frequent small wins, with occasional larger hits. The full line of wild symbols does pay 500x the total bet, so that's the one you'll want to see.