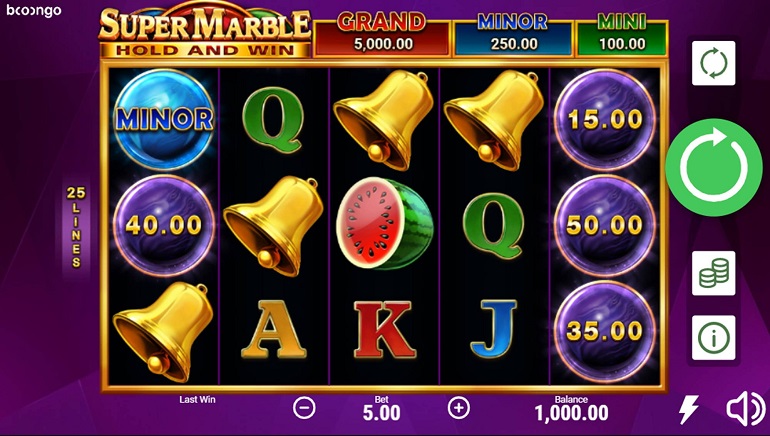 Super Marble is the latest slot to release in Booongo’s Hold and Win series, which has also spawned Moon Sisters and Sun of Egypt.

After loading the slot, players can choose their wager from a betting grid with more than a dozen options. It all starts from a €0.25 low point before hitting the high of €60.00. An auto-play has been included and will remain active until the player presses stop.

Playing cards, grapes, oranges, watermelons, and bells are included as the base symbols that can be matched from left to right over the 25 fixed paylines programmed by Booongo. Any gaps in a payline can be filled as long as only a base symbol is missing.

Purple marbles have been designed as the bonus symbols. Six or more are required to begin the bonus game. Multiplier values can appear on the bonus symbols and there are four re-spins that can occur. The bonus round can end if all symbols have been used, while it’s possible to reset the re-spins if new symbols land.

What will also be recognisable from the Super Marble interface are the jackpot headings of Grand, Minor, and Mini, which run from high to low in succession. The Mini (20x) and Minor (50x) jackpot tiers are represented by symbols bearing their names, while the Grand jackpot can be won if all 15 symbols are collected for one of the lower tiers.