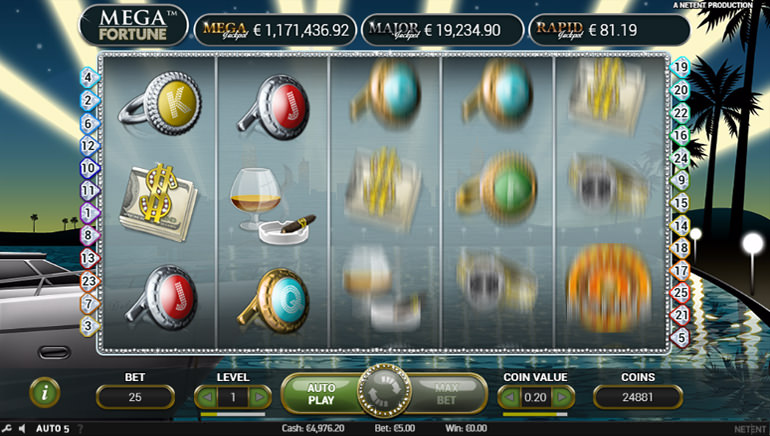 With the latest lucky winner netting €3.3 million from the Mega Fortune Mega Jackpot, NetEnt's progressive slots have awarded no fewer than 60 €1,000,000+ wins.

NetEnt's hugely popular Mega Fortune slot came through once again for a lucky British player. This time around, it was to the tune of €3.3 million, which may not be a record-breaking amount at this point but it is certainly a huge amount of cash nonetheless.

The player in question was spinning away at just 50c a spin playing at Gate 777, an online casino owned by the well-known White Hat Gaming group. When three bonus symbols landed on the first three reels, the game triggered the Bonus wheel which, in this case, went all the way, awarding the massive €3.3 million Mega Jackpot.

Mega Fortune is one of the older slots developed by NetEnt featuring symbols of lavish and luxurious lifestyle such as champagne bottles, expensive watches, cards, and yachts. The game features three random jackpots, Rapid, Major, and Mega, and all three of them can be won at any spin regardless of the stake per spin.

Over the course of the years, NetEnt's jackpot titles like Mega Fortune, Arabian Nights, Hall of Gods, and Mega Fortune Dreams have produced no fewer than 60 winners of €1,000,000+. For the game developer this is a clear sign that players enjoy these types of games that offer a shot at a really big win.

That's why the company has recently expanded its offering of progressive slots with titles such as Mercy of the Gods, Imperial Riches, and Grand Spinn. While these slots don't feature jackpots as big as some of their classics, they still attract a lot of attention from players all over the globe.

NetEnt has no plans to stop here, either. In the PR congratulating the latest lucky Mega Fortune winner, Bryan Upton, company's Director of Games, has announced there are more games of this type in the pipeline and players can expect to see some of them go live very soon.