Bundle Up Before Spinning the Reels of Ice Joker, Play'n GO's New Slot 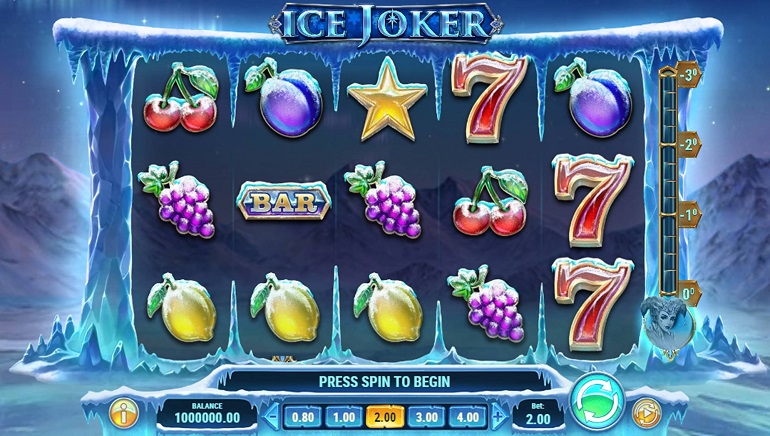 Play'n GO's new slot, Ice Joker, features a beautiful winter wonderland and the chance for players to win up to 51 respins and a maximum payout of 3000x per spin.

It’s nice to see a slot come out in December that doesn’t revolve around the holidays. At the same time, Play’n GO doesn’t ignore the timing and has created a beautiful winter wonderland that features a new kind of joker, Iceilia, the Ice Joker. Iceilia is involved in the two main features of the game: Frozen Respins and Winter’s Wheel. Players can win up to 51 respins in one go and score a maximum payout of 3000x per spin. Ice Joker can be played at Play’n GO online casinos this holiday season and the whole year-round.

Ice Joker is a 5-reel, 20-payline slot that’s playable on all devices. At its core, Ice Joker is a classic fruit machine, but the design has been upgraded with stunning blue ice and snowy mountains in the background. The slot is rated only 5/10 on Play’n GO’s volatility scale, which means wins will be often but not too high. The default RTP is 96.23% and the maximum win per spin is 3000x the stake.

Symbols are beautifully frosted with a layer of snow and include plums, lemons, grapes, cherries, lucky 7s, bars, and stars. There are also 2 wilds, a standard joker wild and the Ice Joker herself, and a snowflake scatter.

Whenever the Ice Joker wild lands on the reels, she rewards 3 respins. The Ice Joker remains sticky and expands by 1 position with each respin until the reel becomes totally covered with ice. Then she disappears. If additional Ice Jokers land, the respins continue. There’s a Thermometer Charge Meter on the right side of the grid that keeps track of how many respins players have left.

When 3 scatters land on the reels, the Winter’s Wheel feature is triggered. When this happens, a spinning wheel is activated and players can win up to 7 Ice Jokers to be used during the round. After the wheel is spun, players get 1 free spin.

Frozen Respins are in play during this round, so if an Ice Joker lands, players get a respin. When the respins are over, one of the Ice Jokers that the player won by spinning the wheel will be added to the reels and the bonus game will continue. The feature ends when all the Ice Jokers have been used up and all respins have been finished.

Play’n GO’s Ice Joker is, in essence, a glorified fruit machine, but that doesn’t make it unappealing. While lovers of adventure and suspense may not find what they’re looking for here, the slot’s striking graphics, multiple features, and decent maximum payout of 3000x per spin make it perfect for recreational players.