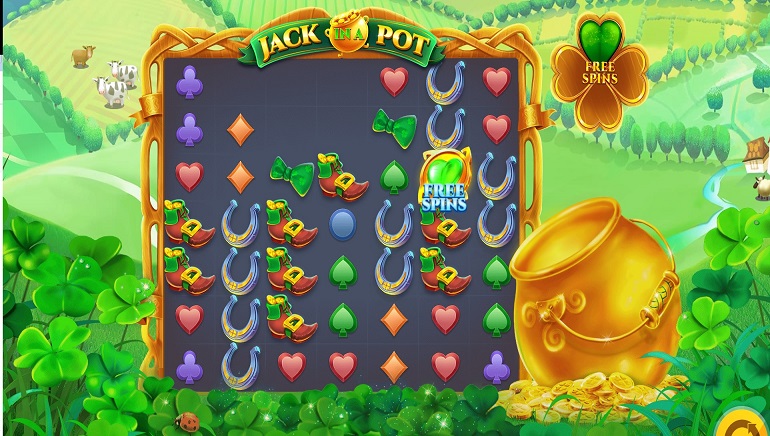 Jack in a Pot is a new Irish-themed slot from Red Tiger Gaming that features a happy Leprechaun appearing next to the reels, rewarding players with bonus treats

Red Tiger Gaming have announced that their latest slot machine will be the Irish-themed Jack in a Pot, which plays out on a 7x7 grid of symbols and stars a Leprechaun who uses his pipe, mugs of beer and rainbows to award players with special features.

The symbols are set within a gold frame and against the classic Irish backdrop of rolling fields and four-leaf clovers. A big pot sits next to the game and Jack the Leprechaun can jump out to work his magic on the reels.

Jack in a Pot uses a cluster format, with players winning a prize whenever matching symbols are grouped together after a spin. The clusters will then vanish and new symbols drop down from above. With a little bit of the Luck of the Irish, players will see new winning clusters formed and the process gets repeated. If all 4 leaves of a clover appear at once, a free spins bonus game is triggered.

Jack is a very generous Leprechaun, who leaps from the pot to award several bonuses whenever special wild symbols create winning clusters. If the rainbow wild symbol forms a cluster, Jack sends a rainbow across the reels, transforming symbols for bigger wins.

The beer wild symbol opens taps above the reels that pour beer over the game to add new symbols, while the pipe wild symbol sees Jack blowing smoke onto the game to create high-paying Mega Tiles. When the hat wild forms a winning cluster, Jack's magic hat spins to remove low-paying symbols from the grid for the chance to claim some big wins.

An Adventure In The Emerald Isle

This cartoon style slot has been developed to work on desktop and mobile platforms from stakes ranging from 0.20 to 40.00 per spin. It's a high volatility slot that can pay up to 2,000x the stake and will have players leaping for joy at online casinos from November.