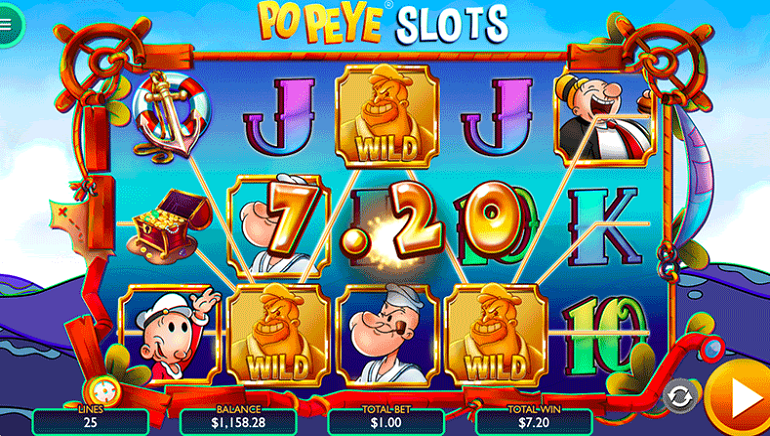 Popeye Slots is a brand-new title from Vibra Gaming that features the famous cartoon sailor and other characters across 5 reels and 25 lines..

Famous cartoon characters fill the 5 reels and 25 lines of the Popeye Slots from Vibra Gaming. Brought to online and mobile casinos in a bright colourful style, Popeye Slots features Olive Oyl, Bluto, and other stars of the classic cartoons.

Bonus features of this high volatility game include wild symbols that expand in different directions, respins and free games with upgrades.

Playing card symbols, a lifebelt, pipe, and treasure chest appear alongside the main characters, along with baby Swee'pea and J Wellington Wimpy. Animated waves roll behind the reels and the characters move around when they are part of winning combinations.

Olive Oyl and bad-guy Bluto are both wild symbols who can act as others if needed. When he lands on the middle reel, Bluto expands diagonally, or appears on the top or bottom rows. Between 1 and 5 respins then play out with Bluto staying locked in these patterns. When Olive Oyl appears on any of the middle reels, she expands to fill the reel before locking in place for between 2 and 5 respins.

Three, 4, or 5 cans of Popeyes' favourite spinach will trigger 8, 12, or 20 free spins. During these Bluto and Olive Oyl wilds will appear more often, awarding random multipliers of between 2x and 7x. Players can claim wins of up to 1950x their stake from the free spins multiplier feature.

Play On Any Device

Popeye Slots is compatible with PCs and mobiles. Players can spin the reels for between 0.25 and 2.50 per spin, and it pays back at an average rate of 95%. A hit ratio of 33.95% combines with a high volatility that's rated 5/5 by Vibra Gaming.

Ramiro Atucha, Chief Executive Officer of Vibra Gaming, said: “I think fans of the comic and the cartoon are going to love Popeye Slots as it captures the look and feel of the story perfectly, creating a sense of nostalgia and recognition that will be hugely appealing.”