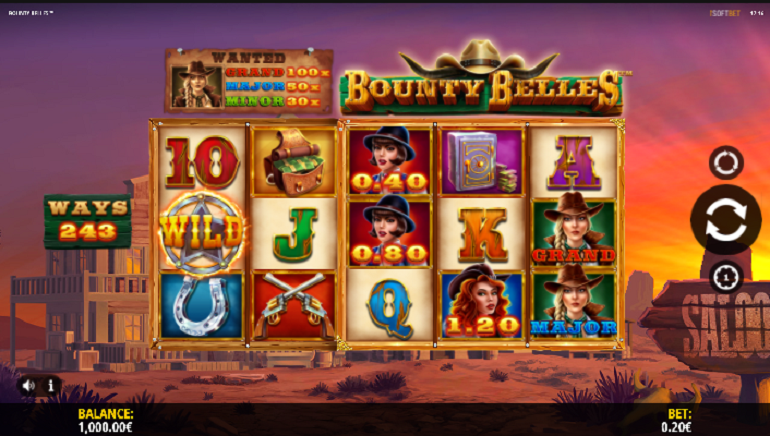 Rich in features and offering bounty values up to 100x the stake, the new slot by iSoftBet promises an exciting and adrenaline-filled adventure on the reels.

The latest game to come out of the iSoftBet workshop takes players back in time to the Wild West era, presenting them with the task of chasing faces from wanted posters and earning big bounties for their efforts. Featuring 243 ways to win in the base game, expanding reels, and individual bounties up to 100x the stake, the new Bounty Belles slot is set to generate some serious traction with the players.

Bounty Belles offers an exciting gameplay where the main goal is to chase down dangerous outlaws and collect bounties for every catch you make. The game features sleek graphics with wood-framed reels set on a backdrop of a typical Western town from the period.

On the reels, you'll encounter symbols such as horseshoes, guns, cowboy hats, steel vaults, and bags full of money. Of course, there are bounty posters with cash amounts and three different jackpots, featuring 30x, 50x, and 100x your stake.

The sheriff's badge is the wild symbol, substituting for all other symbols to form winning combos, and triggering the Wild Bounty feature, which will collect all values featured on bounty posters that land on that spin.

Three or more bonus symbols landing on the same spin triggers the bonus round featuring 10, 12, or 15 free spins, depending on the number of scatters. During the bonus, special features are much more frequent, creating opportunities for big wins.

All in all, Bounty Belles by iSoftBet is an interesting game that combines a few existing mechanics into a new and exciting gameplay, making it well worth at least a few spins.