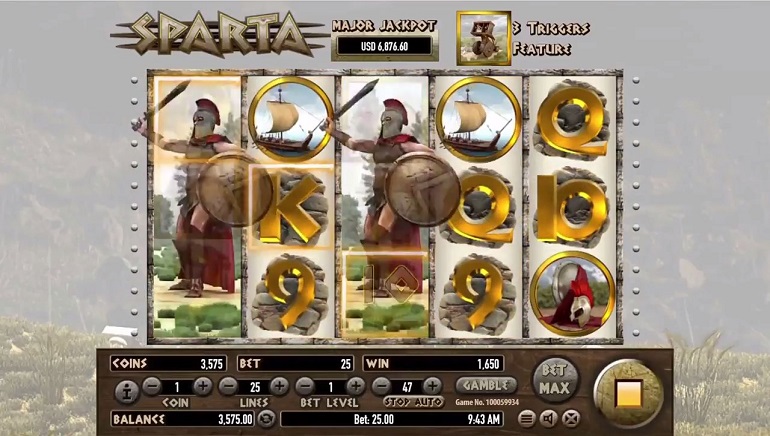 Fans of Ancient Greece will get a kick out of Habanero’s newest slot game, Sparta, which features hardy warriors, billowing warships and ancient military weaponry.

Fans of Ancient Greece will get a kick out of Habanero’s newest slot game, Sparta, which features hardy warriors, billowing warships and ancient military weaponry. But unlike the feature film 300, which is set in the ancient city, the Sparta slot focuses less on the gore and more on the opportunities for scoring large wins.

Sparta is a 5x3 reel, low volatility slot. Players can select up to 25 lines, and the Zeus lightning symbol has a high value and pays up to 1800 times the total spin bet. The background of the game itself is rather, well, Spartan (pun intended!), but the soundtrack is intriguing and the graphics enjoyable. When players hit a winning combination, golden coins rain down upon the screen, the numbers soar, and the tempo speeds up.

True to form, Habanero’s newest creation was developed in HTML5, which means that it runs smoothly on desktop, tablet, and phone.

CEO of Habanero, Nic Ioannoy, commented, “We think Sparta will be really popular across a wide range of territories as it is a perfect combination of the old and the new.”

Players can expect to find the new Sparta slot at Habanero casinos like Winner Casino, 32Red Casino, and Gala Casino.

In March of this year, Habanero released a slot game entitled Roman Empire, a 25-payline, medium volatility slot that was received well across the board. With its latest release of Sparta, it seems that Habanero has tapped into a niche that suits both the company and their players.

Habanero supplies quality slots and table games for the online and land-based casino industries. Habanero’s portfolio of slots currently includes over 60 titles, with an additional six table games and ten video poker games. Habanero games have been directly integrated into 25 operators and are available in 15 languages.