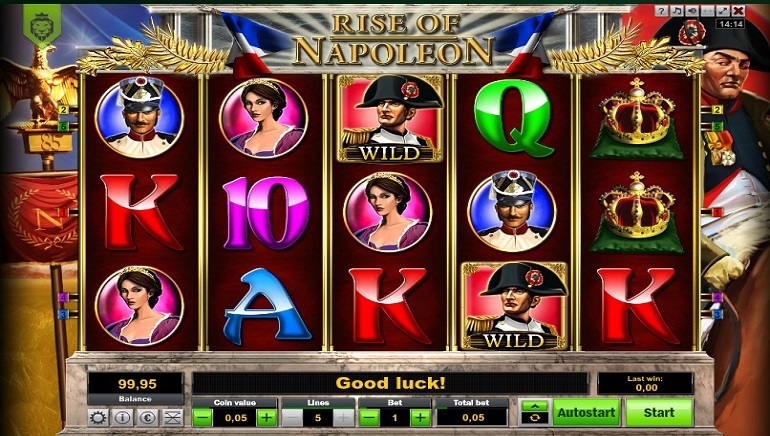 Napoleon – Rise of an Empire is new from Blueprint Gaming and can offer free games, wild multipliers, and a 100,000x jackpot.

Blueprint Gaming casinos have finalised the September 2018 unveiling of an ambitious new slot game that is based on Napoléon Bonaparte, the notorious emperor of France during the French Revolutionary Wars of the 19th century. The newly released Napoleon – Rise of an Empire slot is ready to take to the battlefield and could appeal to history enthusiasts.

Take to the Battlefield

Napoleon has been designed as a dramatic affair, with the slot beginning by showcasing an intro video accompanied by orchestral music. The slot interface then displays five reels by three rows, which have been laid over the top of a grassy battlefield shrouded in the smoke of cannon fire.

Blueprint has revealed in a press release that the Napoleon slot has been made with HD graphics, while also stating that it is highly volatile, which means that winnings can be paid out at higher thresholds, but are challenging to unlock. In regard to wagering, the slot can be played at a low of €0.20 per spin and a high of €40.00.

Napoleon – Rise of an Empire has been released as part of Blueprint’s Colossal Payout Series, with players given the ability to match up the various war-based symbols along 20 paylines that are fixed and cannot be adjusted.

Bonus scatter symbols also make an appearance in the slot, with three or more leading to the reception of 10 free games. At the same time, players can also benefit from two further features, including the Napoleon Streak and Wild Multipliers.

Napoleon serves as the wild symbol to the game and can boost payline victories by adding an additional multiplier that rises based on how many wilds form part of the payline. The Napoleon symbol also serves an additional purpose in triggering the 100,000x jackpot whenever a complete match of five is amassed on the very same payline.