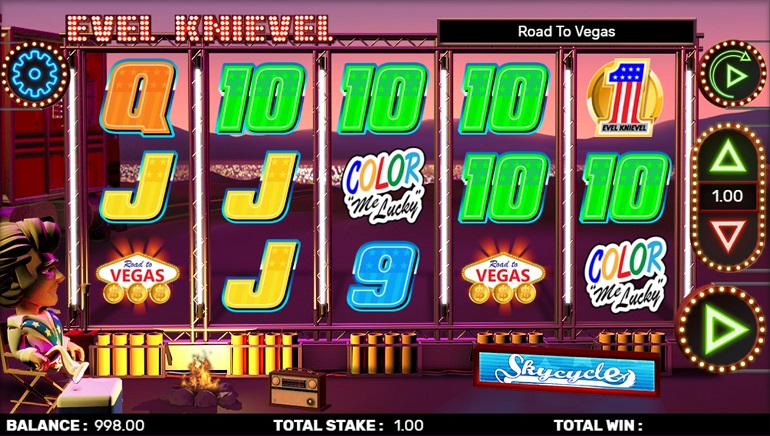 CORE Gaming is well known for their incredibly innovative and exciting games. Players continue to create a buzz surrounding each and every CORE Gaming release and the latest one is already making quite a name for itself among players at some of the leading online casinos in the world.

Evil (also Evel) Knievel Road to Vegas is a 25-line ultra-modern video slot with five bonus features and a huge maximum jackpot worth £250,000. The game can be found at leading brands Paddy Power Games, Gala Casino and Unibet Casino.

Evil Knievel was well-known for his death-defying motorcycle stunts, which led him to fame around the world. The slot game bearing his name is set in a camp on the outskirts of Nevada, as the stuntman makes the trip to Las Vegas. Knievel talks about some of his biggest jumps at Wembley Stadium and the Grand Canyon, whilst players watch as he flips through some of the most amazing pictures from his unbelievable career.

The game has a number of special features and bonus rounds, which are triggered by five 'star' scatter symbols landing on the reels. Each round offers prizes for completing successfully.

Sky Cycle is the first bonus round that put's players in Knievel's driver's seat down Route 66. Players will be able to jump off dangerous ramps and drive through obstacles, as they win prizes.

Memory Bank let's players choose from eight of his most famous stunts, which uncover prizes at random. If star symbols are collected, it will lead to bigger wins.

To the Limit will give players a number of free spins, which continue to spin and win prizes as Knievel revs his motor. Spins are random and will reveal prizes as the round goes on.

The last feature, Jump for Glory is a replica of Knievel's famous jump at Wembley Stadium. Evil will jump the ramp three times and tries to hit cash that is above the line of buses, giving players the same amount that he caught after he lands.