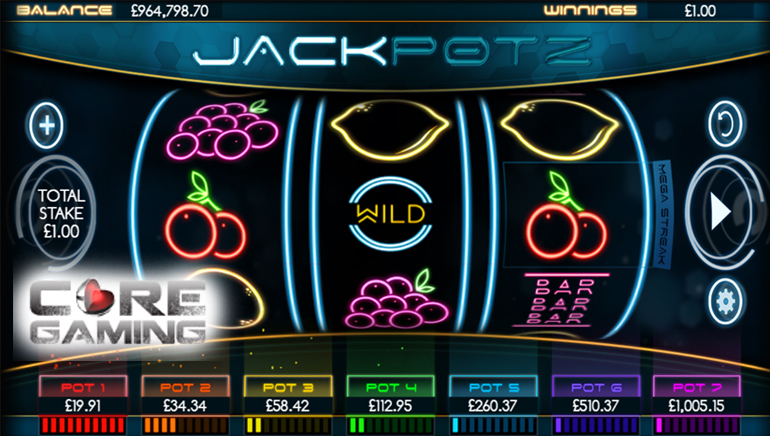 CORE Gaming has announced the release of its revolutionary new slot game, Jackpotz, an HTML5 creation that offers a whopping seven progressive jackpots and six-figure pay-out - an industry first. Jackpotz is available to play exclusively at Sky Vegas Casino, and will release at other CORE Gaming casinos in the future.

Jackpotz is a 3-reel, 5-line slot; its appeal lies in the simplicity of the game and the magnitude of the jackpots. Players can enjoy the game’s sharp graphics and visuals, as well as its smooth interface on both desktop and mobile. Special features include Wilds and Mega Streak, a series of Win Spins which awards between 4 and 20 free spins. The Mega Streak is triggered when the Mega Streak symbols land on reel 3 in the center payline.

And of course, the masterpiece of the game is its seven progressive pots, which come into play when the on-screen game logo randomly lights up and the Jackpotz Trigger is released. Once this happens, players can win at least one of the jackpots, or a consolation prize - so either way, they go home with something. The prize the player wins is determined when the reels come to a halt. If a jackpot has been won, it will automatically reset to its seeded amount.

Chief Commercial Officer of CORE Gaming, Mark Rehorst-Smith, commented, “This is just the kind of game that we believe slots fans will love. The beauty of Jackpotz is that it combines the simplest of slots games with the innovation and excitement of the seven progressive pots, from which players can grab huge prizes.”

CORE Gaming is a UK-based online gaming software developer and a world leader in HTML5 gambling content. Since its launch in 2011, the company has created over 150 casino games. CORE Gaming is licensed by the UK Gambling Commission.